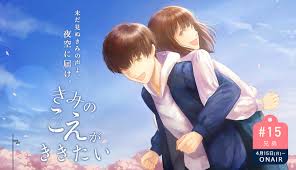 Have you ever wanted to call Yuuki Kaji your “onii-chan”? I won’t judge you. In fact, I’m here to tell you that one teenage girl may have her wish granted in the near future.

Popular radio program “School of Lock!” opened auditions on Monday for the part of “Yuuki Kaji’s little sister” in an original radio drama titled Kimi no koe ga kikitai (I want to hear your voice). Kaji will hand-pick the winning entry himself. The radio drama is set to air from April 15 to 18.

Auditions are restricted to girls aged between 10 to 19 who aren’t already signed with an agent. To audition, you simply have to download the “Eggs Voice” app from the Kimi no koe ga kikitai website and submit a voice recording of the designated lines. Note that every submission needs to have parent/guardian approval. The audition period is from March 18 to 31.

The Kimi no koe ga kikitai project was planned by AKB48 producer Yasushi Akimoto, who will also act as supervisor. The intent of the project is to “find the next generation of voice talent.” The “School of Lock!” radio program airs every weekday from 10:00pm to 11:55pm (10:55pm on Fridays) on Tokyo FM/JFN38.