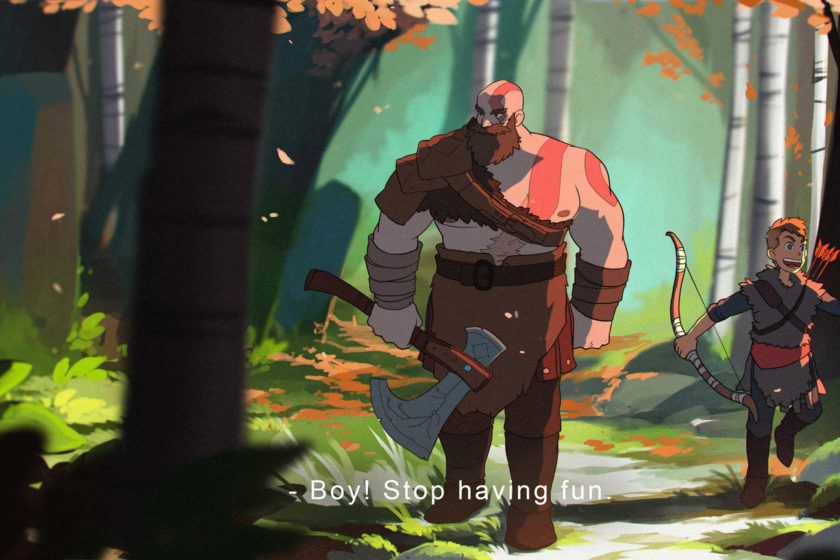 So we’ve already had Ni no Kuni, a relatively well-known JRPG which has its amazing designs done by none other than Studio Ghibli themselves.

However, what if more than just this specific video game series had its aesthetics done by the Japanese animation giant? Well, look no further than at the works of Lap Pun Cheung, a senior concept artist at Boss Mode Games, who does just that with several franchises.

Boy. (Yes, pun intended for all you God of War fans out there.) It’s almost as if Studio Ghibli’s art style was meant for every single fantasy RPG out there. Somehow, it always manages to capture that mystical and wondrous atmosphere, and the land of the Norse gods where God of War takes place is definitely no exception when you give it the good old Ghibli twist.

Yet another RPG given the Ghibli makeover by this fan art. Just like in the previous piece, the usage of Ghibli’s art style here helps emphasize on the fantasy setting that this game takes place in. And in a good way, both Geralt and Kratos look much more adorable this way.

Finally a piece that isn’t about a parent and their child I guess? Jokes aside, the signature aesthetics for Studio Ghibli films works wonders again in these fan art for the famous Final Fantasy VIII. Everything from the expressions of the loving couple to the menacing castle in the background are just made so much more amazing.

You thought fantasy RPGs were all Pun Cheung could turn into Ghibli-style art pieces? Even everyone’s favorite sci-fi movie series, Star Wars, gets its own re-imagining. Just look at how adorable the characters (especially Chewbacca) are in this different art style! And even Darth Vader himself and his army of Stormtroopers are turned into… well, just see it for yourself.

I’m still digging this look for everybody’s favorite Dark Lord of the Sith. Somebody make an actual Star Wars animated series in this style, please.

5. Masters of the Universe

Did someone say He-Man? Yep, Pun Cheung made this Ghibli rendition of the iconic series for the 2016 Mattel Art Show. It just works. You’d almost be convinced that there was an actual Ghibli-made series for this.

These are only a few of the very amazing Pun Cheung’s artworks. His own site shows that he’s working on two different projects right now, the first being a Studio Ghibli-inspired story called The Departed and the second a cyberpunk project called Neon Divide.  Which one of these was your favorite?