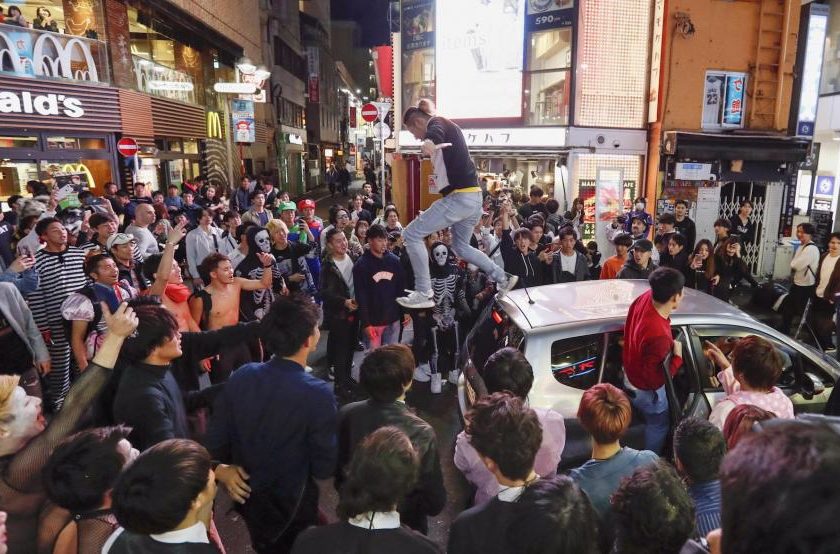 Every year, the area around the Shibuya Crossing in Tokyo turns into a massive street party on the weekend closest to Halloween, with people dressed up in their Halloween best taking to the streets, both Japanese and foreigners.

The outdoor event, while unofficial, gets more difficult to control with more and more people joining in each year due to its popularity and accessibility. Shibuya’s ward mayor, Ken Hasebe, urged stores in the area to not sell alcohol during that time, and also implored for those celebrating to keep themselves in check, considering how there aren’t actually any official regulations governing this whole thing.

Unfortunately, it appears that Mayor Hasabe’s pleas were in vain, which is rather surprising for a country with a culture that places emphasis on order and regulation. The local police force received a number of reports of all sorts of rather chaotic behaviour on Saturday night, which included assault, groping, upskirt photography… and people toppling a truck. You’d almost think it was a messy bachelor’s night out, or a scene from The Purge. (Without people killing each other, at least.) Take a look.

According to eyewitness accounts, the driver had escaped from the truck after it became difficult to drive through the crowd. He has now filed a damage report with local police after the truck’s windows were smashed and the roof was dented as a result of the rowdy gathering. So much for trick or treat.

As for this one… well, it’s pretty self-explanatory.

Even the police weren’t exactly spared from the madness that night, with some members of the crowd actually trying to force their way into the car. Wow.

The incidents that night made headlines all over Japan, and the behavior displayed was condemned by many people, with most also expressing sympathy for the authorities who tried their best to keep things under control but to no avail.

Before the event was held, Mayor Hasebe told reporters “If an appeal to people’s manners and morals do not lead to improvements, we’ll have to start considering formal, legal regulations and restrictions. I hope that people will remember to be polite as they enjoy Halloween in Shibuya, so that we can continue to have the celebration as a new part of our local culture.”

Seeing as to how trying to be nice turned out, the catastrophe that is the Shibuya Halloween party might be facing some restrictions from now on during its future iterations.