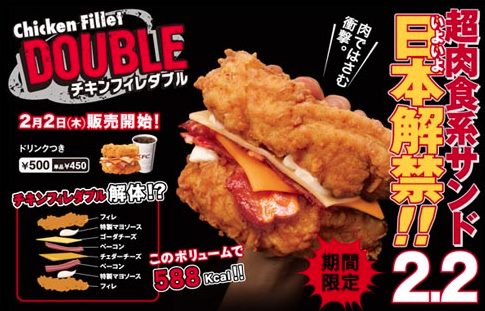 I’m sure most, if not all, of you know about how much Japan loves KFC. There’s that whole famous story about how KFC for Christmas became a widespread practice there, along with the huge slew of celebrity endorsements and promotions held there that outsiders can only dream about. What more could they come up with?

As it turns out, on Monday, KFC Japan released a new video and website dedicated to their latest addition to the menu: The Double sandwich (known as the Double Down in other countries. The sandwich has two fried chicken fillets instead of buns. Nestled in between the chicken buns is bacon, cheddar cheese, barbecue sauce, and mustard relish. And what could be a more appropriate way to represent and promote the new foe to calorie counting, weight management and our wallets than to personify it into edgy, fantasy anime characters? Take a look.

Called “The Meat Pentagon”, the characters that appear in the video are as follows: Lord of Flame (voiced by Jun Fukuyama, who recently voiced Ren Amamiya from Persona 5: The Animation), Burning Phoenix (voiced by Fukuyama), Paladin of Sauce (voiced by Yoshitsugu Matsuoka, the one who voices the one and only Kirito from Sword Art Online), Cheddar Lucifer (voiced by Sumire Uesaka, the actress behind Anastasia from iDOLM@STER), and Time Executor (voiced by Fukuyama). The video and website describe the sandwich’s return with a rather bizarre story about the “Absolute Mana” – that is, the ingredients of the said burger.

The Double will escape the demon realm and invade ours via KFC restaurants throughout Japan on Wednesday, November 1. If you’re in Japan around then, why not give it a whirl? And check out their website while you’re at it.