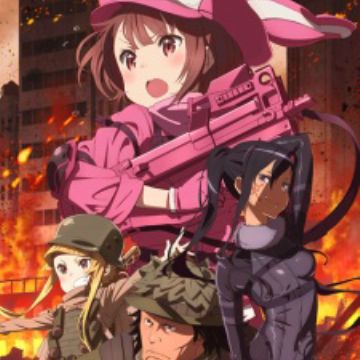 From the get go, Sword Art Online Alternative: Gun Gale Online (this is quite a mouthful, so for the purpose of this review I’ll just refer to this anime as GGO with italics) had quite a fair bit going for it. After all, the Sword Art Online series has become somewhat of a household name in the field of anime and light novels, especially with an entirely new season with 50+ episodes this year. SAO has been known for many things: namely, lots of attractive female characters that have become the eye candy of many, heart-pounding battles, a really impressive soundtrack, and a certain black-haired protagonist who just somehow always overcomes the odds.

Furthermore, the timing of GGO’s release couldn’t have been anymore impeccable. Liking video games and anime somehow seems to come hand in hand rather well (another reason for the appeal of the SAO series), and it so happens that the current fad in video games is the rise of the battle royale genre, which essentially serves as the setting of this entire show. In particular, a squad-based battle royale game mode in the titular in-universe game “Gun Gale Online” dubbed the “Squad Jam”.

However, it would be rather inaccurate and simplistic to say that these things are what this show is all about. In fact, from the first episode, GGO throws out of the window many of the things you would have come in expecting from another entry in the SAO series. Instead of the familiar black swordsman Kirito, a small munchkin girl clad in pink called “LLENN” (voiced by Kusunoki Tomori) serves as the lead character of the show.

As a matter of fact, it could very well be said that subverting expectations and mixing up the usual formula is one key theme of this anime, and a rather outstanding and commendable one at that.

As it is revealed rather early on, unlike in the case of the characters that many are familiar with from the original SAO, whose avatars closely resembled their players in the real world, the real-life identity of LLENN is a polarizing opposite from her avatar: a dark-haired, 1.83 meters tall girl called Kohiruimaki Karen, who dresses up in rather plain clothes.

Despite the jarring differences between the two identities of the same person, Karen couldn’t have been any happier with such a scenario. In truth, Karen suffers from a complex regarding her tall stature in the real world, and thus sees her chibi avatar in the world of GGO as a form of escapism. And no, this isn’t a rather outlandish scenario written for the sake of this story. In Japan, tall girls aren’t exactly the preferred type that the typical guys look out for. The thing is, despite how simplistic Karen’s motivations are for diving into GGO, it’s perhaps this naivety that makes her as compelling of a character as she is relatable to the viewers. And just as a heads up… LLENN’s not the only player who will make your jaw drop when the face behind the screen (or AmuSphere) is revealed. Without spoiling anything, many of the characters in this anime are nothing like their real-world counterparts that it’s almost disturbing.

Nevertheless, this aforementioned simplicity in GGO’s protagonist does not mean a compromise in the intense battles and high-stakes that the series is known for. Slow-motion climactic moments in firefights, accompanied with an excellent, adrenaline-filled soundtrack, help establish and reinforce the tension that the SAO series is known for. There’s even a scene involving a red lightsaber later on in the series that serves a fitting… and rather gruesome tribute to the legendary pop-culture figure known for wielding it. That aside, considering combat is the main focus of the SAO series as a whole, it’s great that GGO is always able to keep it refreshing.

Furthermore, despite not having the element of a death game like in the original SAO as a means to explicitly contrive tension (which explains the element of plot armor Kirito is infamous for), the threat of actual death creeps its way into the show’s narrative in a rather clever and unique way that is woven with the aforementioned theme of escapism, and could be said to provoke some thoughtful discussion on the subject. The first friend Karen meets in-game, a frivolous, tattooed lady called Pitohui (voiced by Hikasa Yoko), plays the game to relieve stress and her anger, a portrayal of escapism leaning more on the negative end as compared to the innocence of Karen’s. This then leads her to become the antagonist of the second half, as this insanity and, as it is later revealed, nihilism, begins to put the actual lives of others and herself on the line. As her brutal ways she kills her foes in her Squad Jam against LLENN clearly depicts, Pitohui is very much treading down a dark path. Along with the other characters, whose avatars also very much differ in one way or another from their real-life counterparts, the writing of GGO successfully weaves the intrinsic theme of escapism in video games into all of them in a way that gamers from every corner can relate. Without spoiling the events of the show, the conclusion is successfully able to tie up all loose ends, and complete Karen’s development as a character (and that of the rest of the cast) in a rather satisfying way.

In spite of being filled with relatively more moments of tongue-in-cheek humour than the main SAO series and a shorter length than the main series, Sword Art Online Alternative: GGO is able to provide enough depth in writing to be compelling in its own right, along with an engaging in-game setting that is bound to captivate gamers and anime-lovers alike.