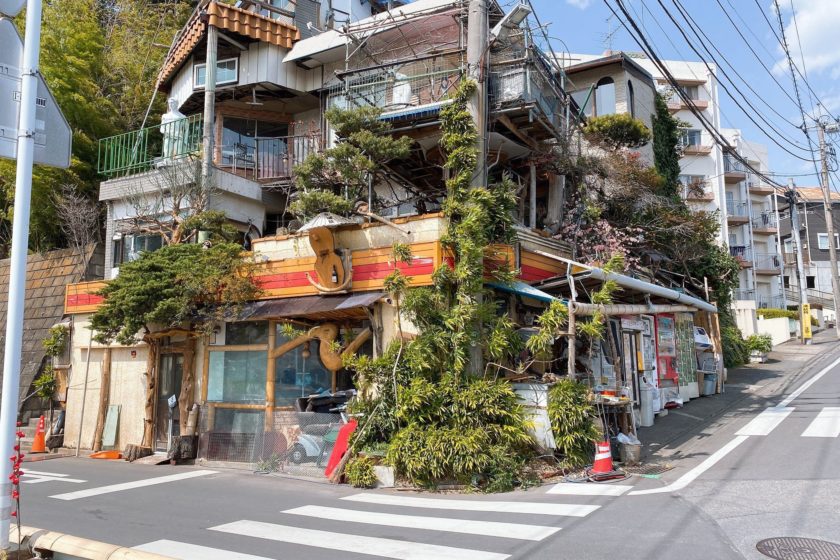 Strolling around the streets of Japan can often feel like an exciting adventure, with hidden gems just waiting to be discovered.

Some of these treasures are only known by locals, and Twitter user @Eyes__Hunter is one of them. After coming across a convenience store on a street corner ten years ago, they recently revisited the building to find that it looked even more impressive than they remembered.

These photos shared online show how the street corner looks like something from a Studio Ghibli anime movie.

The lines of orange and yellow that wrap around the top of the old store are immediately recognisable as belonging to the Japanese convenience store Yamazaki Y Shop, which was in business here until 2001.

Yamazaki stores don’t usually look like this one, though, which comes with several additional stories above it, all jutting out in disorderly fashion. Though it may look run-down at first glance, it does look like the upper stories are home to a residence which is currently being used.

Down on street level, the store appears to be overtaken by nature, with trees poking out from all angles, and a row of old, run-down vending machines selling drinks, tobacco, and unusual knick-knacks. There’s also a cupboard covered in instant noodle lids under a sign that says “Ramen Corner. Udon. Soba.”

With no clear signage to say how the noodles can be purchased, it’s not clear whether the cupboard actually contains noodles, as it looks like it may be a remnant of a past life. The mystery adds to the whimsical, nostalgic charm of the place, though, and Twitter users were quick to send the tweet viral with thousands of likes and retweets.

“This is beautiful – it has an air of Ghibli magic about it.”
“It’s a modern-day Howl’s Moving Castle.”
“It’s so charming I want to make a tiny diorama of it!”
“It looks like a fort!”

Standing the test of time on a street corner in Tokyo’s neighbouring Saitama Prefecture, the charming building is conjuring up all sorts of feelings and memories for everyone who lays their eyes on it.

It’s nice to see that while a lot of things change in Japan, there are some things that stay the same. And if you’re hoping to drop by to take in the sights and maybe even snap a photo or two, here’s the locaton:

And if you happen to go there, remember to practice social responsibility, especially during this time, and to avoid causing trouble and vandalizing the place.