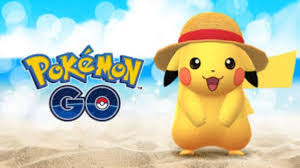 The official Japanese Twitter account for the Pokémon GO smartphone game announced on Tuesday that the game is collaborating with One Piece creator Eiichiro Oda and Kumamoto Prefecture’s “revitalization campaign” by turning the Straw Hat Pirates statues in the prefecture into in-game Pokéstops. In addition, a Pikachu wearing with a straw hat with a red ribbon (similar to One Piece protagonist Luffy’s hat) will appear in the game from July 22 to 29, and the hat will be available as an in-game item for players worldwide. The Kumamoto prefectural government announced the statues in April earlier this year to commemorate Oda’s outreach of 800 million yen (US$8 million) to the prefecture after the 2016 earthquake. (Oda is a native of the prefecture.) Four statues will go up this year followed the another four next year.