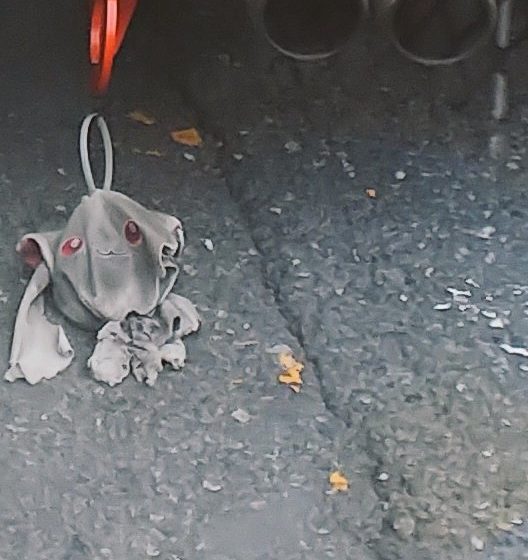 ‘Itasha’, a term for cars covered with custom anime graphics and decals, are supposed to be all about showing love for the driver’s favorite animated character or characters. Take for example this compact four-door driven by Japanese Twitter user @oldriverGT, which has some pretty sweet looking Puella Magi Madoka Magica decals all over.

Also, like with a lot of itasha owners, @oldriverGT’s ride also sports some 3-D salutes to his series of choice too. However, he hasn’t lovingly placed dolls or figures of Madoka and Homura lovingly on the dashboard. Instead, he’s decorated the car’s exterior with a plushie of the magical girls’ power-granting, mascot-cute mentor, Kyubey…

…who he’s strapped to the car’s rear bumper tow ring!

Now, as you’re looking at that photo of @oldriverGT’s car from Twitter user @yuki_fmk, you’re no doubt noticing that the size and position of the connected hoops means that whenever the car is in motion, Kyubey is getting dragged at high speeds along the road. And sure enough, the ordinarily cuddly and snow-white Kyubey is now a torn, tattered husk, stained a dirty gray by mile after mile of high-speed friction against the asphalt, with the car’s ever-close tailpipe blasting him with exhaust gasses too.

And you know what? That’s exactly how @oldriverGT wants things to be.

See, while Madoka Magica is one of the most respected anime series of the 2010s, Kyubey is one of the industry’s most hated characters ever. His innocently cute appearance and surface-level alignment with established mentor animal magical girl storytelling tropes hide a brutally unempathetic attitude towards individual human life, and even once he’s been exposed as perpetuating a cycle of death and corruption, he’s completely blasé about the whole “sentencing young girls to die in their early teens or go mad shortly thereafter” thing.

So @oldriverGT, filled with the same anger at having his belief betrayed that so many fans did, decided to take revenge by strapping Kyubey to the back of his car and painfully dragging him wherever he goes, with his punishment seemingly set to last until his body disintegrates entirely or the universe itself dissolves from entropy, whichever comes first.

Other Twitter users who have watched Madoka Magica were quick to applaud @oldriverGT’s initiative in acting as judge, jury, and gradual executioner.

“No pity. This is what should be done.”
“Kyubey must never be forgiven.”
“When you look at Kyubey from a human perspective, he’s a devil.”
“A proper comeuppance.”
“Good job, itasha driver!”

Sadly, as Madoka Magica fans know, Kyubey’s essence is able to survive the destruction of his physical form. So while this is the most destructive treatment of an anime character since that guy who was dragging a Love Live! idol behind his Subaru, it still won’t save young girls from Kyubey’s insidiously tempting offer to enter into magical girl contracts…