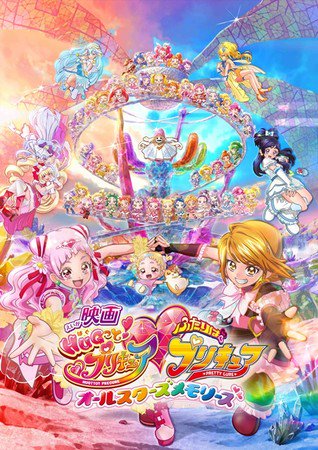 Who said the magical girl genre was dead?

In our previous article, we wrote about an awesome piece of fanart featuring a crossover of famous anime characters. And by the looks of it, it seems as if the crossovers aren’t stopping there.

HUGtto! Pretty Cure ♡  Futari wa Pretty Cure: All Stars Memories, a crossover film for the Pretty Cure magical girl anime series, opened in theatres in Japan on Saturday, 27 October. It features a staggering 55 Precures, the titular magical girls of the series, and has now earned the Guinness World Record for “Most magical warriors in an anime film.” The staff revealed the accolade at a stage greeting event at Tokyo’s Shinjuku Wald 9 theater on the day of the premiere itself, with the award certificate being on display there until November 7.

The theme of the movie is “memories”, which is rather fitting considering how the series is also commemorating its 15th anniversary. Hugtto! Pretty Cure, the latest television anime series in the franchise, premiered on February 4 this year, while the original Futari wa Pretty Cure series ran from 2004 to 2005 and is currently streaming on Crunchyroll with English subtitles.

Meanwhile, just recently, the Japan Patent Office reported a filing for “Star Twinkle Precure”, suggesting that another entry for the long-running franchise may well be on its way soon. The famous smartphone-JRPG, Granblue Fantasy, also just ran a collaboration event with Futari wa Pretty Cure as part of the aforementioned 15th anniversary of the series.

If anything, it looks like the magic in the magical genre still shines brightly, and will continue to do so for quite a while.