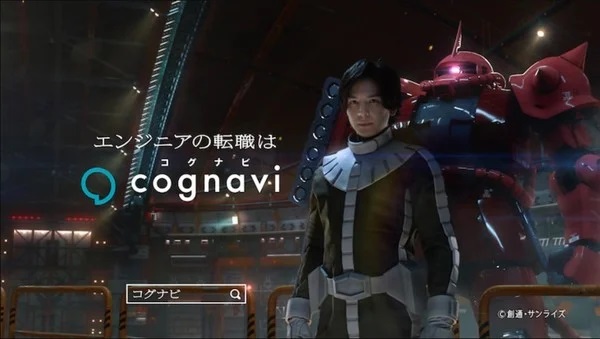 The job recruitment site Cognavi, which specializes in engineering-related fields, started running a television commercial from Thursday with Mobile Suit Gundam. The ad is comprised of both an animated and live-action part. It stars Hana-Kimi and Honey & Clover live-action actor Toma Ikuta.

The ad depicts Ikuta dressed as an engineer as he stumbles into the world of Mobile Suit Gundam, where he encounters Char, who tells him that an engineer’s skills would be very useful in the Gundam world. The character designs in the animated part are handled by Tsukasa Kotobuki (Saber Marionette J, Mobile Suit Gundam: The Origin).

Ikuta appears in the animated part as a Zeon soldier dressed in a pilot suit. Char voice actor Shūichi Ikeda also voices a number of lines.

Amuro Ray voice actor Toru Furuya will appear in a second ad, which is scheduled to release on May 11. The ads are also planned to be released on Cognavi’s YouTube channel in the future.