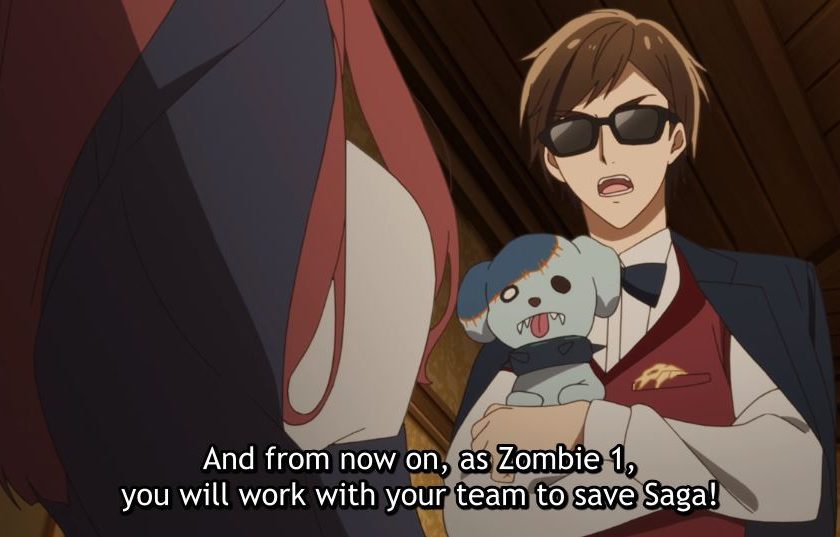 Zombies and undead as a whole are definitely not unheard of in the anime scene. From Highschool of the Dead to Tokyo Ghoul, most people have seen, or at the very least, heard of their fair share of this trope. So when the original anime Zombieland Saga was announced in July, along with some teaser visuals and a video, everyone thought they knew what was coming their way. But as it turns out, we were all unprepared.

The teasers were only just the beginning of the enigma that is Zombieland Saga.

Sometime in September, the anime community was befuddled yet again when a private screening was held for a test audience. The viewers and media present all had to sign non-disclosure agreements, continuing in the show’s trend of being as mysterious as possible until the air date finally rolled around. To stir things up even further, an audience poll was taken, and apparently results revealed that 96% of them were satisfied with how the anime turned out. Furthermore, 88% of them responded that they did not foresee the direction the show took. By then, the rest of us were only certain of a few things: this anime has subverted expectations in one way or another, and the audience loved it.

At last, October the 4th finally came, and I was one of many who was eagerly anticipating to see what kind of zombie-related shenanigans this bunch of cute schoolgirls were going to get themselves involved in. Oh, and not forgetting the cute zombie dog shown too.

Needless to say, I was blown away by what I would witness over the next twenty odd minutes that night, and I’ll be sharing my opinion and views of the unexpected series thus far. That being said, turn back if you don’t want to be spoiled. (Honestly, you should just watch it for yourself before reading my thoughts on this…)

The anime starts off with a familiar scene from one of the teasers: the lead character, Minamoto Sakura, receiving a letter for an idol audition before excitedly hurrying along out of her house. Sounds all fine and dandy, right?

Nope. Only a few seconds after stepping out of her house, the poor girl gets hit by a truck head on and sent flying into the sky. To make things even more puzzling, a montage of different angles of the unfortunate accident ensues with heavy metal music in the background. Ouch.

The fate of poor Sakura is left ambiguous at first, as moments later we find her awake and in one piece in a run down mansion of sorts, like the one in the teaser visual. However, getting run over by a truck was merely the start of the lass’s troubles, as her exploration of the mysterious buildings leads to her being pursued relentlessly by none other than the titular zombies themselves.

Terrified, Sakura then makes a run for it out of the mansion and tries to find her way in the falling rain, encountering a policeman who she then asks for directions from. As she finds out the hard way in a matter of moments, though, Sakura’s true fate following the accident is revealed: she’s a zombie as well. And how did she find out? By being shot out of terror by the aforementioned policeman himself, who notices the huge gash on her forehead that even she herself wasn’t aware of..? What is going on? By now I’m just straight up confused.

Sakura is eventually brought back to the mansion by a mysterious young man wearing glasses, Tatsumi Kotaro, who forcefully reacquaints her with the zombie girls from before. And this is where the biggest surprise of all time is at last revealed: Kotaro had revived Sakura and the other girls as zombies to form an idol group, so as to save the town of Saga.

Yup, everything finally makes sense; we got duped into watching an idol anime.

Furthermore, the reason she (and us viewers) couldn’t identify her as a zombie was because of the surprisingly convincing makeup the man who put on her, which was then washed away by the downpour in the earlier scene. What a good save.

Despite the uncharacteristic twist, I was not deterred from continuing the rest of the episode. In fact, idol anime series were something I was kinda comfortable with, so I was actually morbidly curious to see how turn out. Would Zombieland Saga subvert my expectations again?

Lo and behold, I was spot on as the first episode wrapped up with the idol group, Death Musume, and their first performance… at an open heavy metal concert. To make things even more shocking? The deathly groans Sakura’s fellow zombi- I mean, idols made was a huge hit with the audience, along with impossibly amazing headbanging due to their undead bodies. Death Musume’s first concert was a resounding success, and it would be followed by more performances by these undead lasses in the next episode or so that were all pulled off surprisingly well due to the weird circumstances of theirs.

Now, don’t get me wrong, I was genuinely expecting and hyping myself for another anime revolving around survival amongst zombies, and for a brief moment I was just so darn confused as to whether I should carry on watching or not. However, just as the test audience had claimed, MAPPA and Cygames’ Zombieland Saga definitely caught me off guard, albeit in a pretty positive way. It looks like the wait was worth it, and I definitely look forward to seeing what other unexpected surprises would be in store for us viewers. If anything, Zombieland Saga literally redefined anime zombies and idols and breathed new life (haha.) into their role in a story. My words here won’t do it justice, so if you have’t gotten around to watching it, please do! If you’re sick of the same-old tropes being used from the start, give this series a shot.