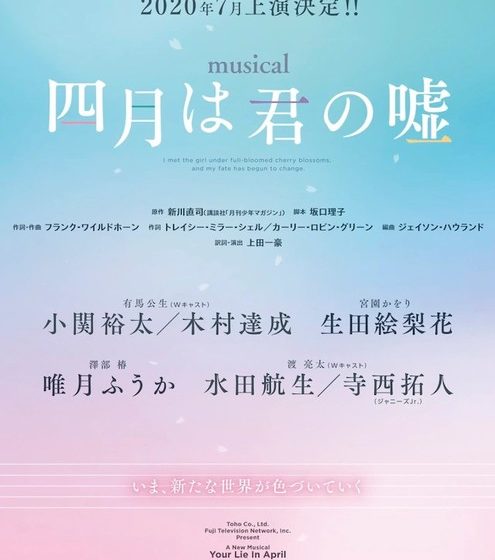 TOHO and Fuji TV announced on Thursday that Naoshi Arakawa’s Your Lie in April (Shigatsu wa Kimi no Uso) manga is inspiring a stage musical that will run in Tokyo’s Brillia Hall in July 2020.

Frank Wildhorn, an American composer known for songs sung by Whitney Houston (“Where Do Broken Hearts Go?”) and Natalie Cole, is scoring the musical. Wildhorn also previously scored Death Note the Musical, and is a Broadway veteran of such hit musicals as Jekyll & Hyde and The Scarlet Pimpernel. Tracy Miller Schell and Carly Robyn Green co-wrote the lyrics with Wildhorn. Composer Jason Howland (Beautiful: The Carole King Musical, Jekyll & Hyde) is in charge of the arrangement and orchestration for the musical. Ikko Ueda directs the musical, while Riko Sakaguchi (The Tale of the Princess Kaguya, Mary and The Witch’s Flower) pens the book. Arakawa’s original manga follows Kōsei Arima, a former child prodigy who lost his ability to play the piano when his mother died. His daily life is monochrome, but it begins to gain color when he meets a female violinist by chance. Kaori Miyazono is an audacious go-getter who is overflowing with personality. Enchanted by the girl, Kōsei begins to rediscover his love for piano when Kaori invites him to be her accompanist for a competition.

The manga debuted in Kodansha’s Monthly Shonen Magazine in 2011, and ended in February 2015. Kodansha published the 11th and final compiled volume in Japan in May 2015, which shipped with an OVA episode. The series won the Best Shōnen Manga category in Kodansha’s 37th Annual Manga Awards in 2013. Kodansha Comics released the manga in North America, and released the 11th and final volume in December.

A television anime series adaptation of Arakawa’s manga premiered in 2014. Aniplex of America streamed the anime on the Aniplex Channel, Hulu, and Crunchyroll as it aired in Japan. The company released the series on home video with an English dub. The manga also received a live-action film adaptation, which opened in Japan in September 2016. A stage play adaptation debuted in 2017.