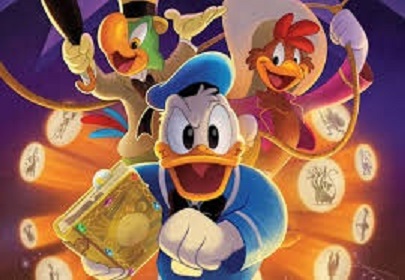 In 2018, Disney had made a streaming series called Legend of the Three Caballeros, a follow-up to the 1944 theatrical feature The Three Caballeros. But as surprised as I was to know that, I was even more surprised to know something that Donald Duck now knows.

Take a look/listen to this clip from the show, posted to Twitter by @GaijinGoombah, in which Donald Duck, José Carioca, and Panchito Pistoles/Gonzalez get some sound advice from Donald’s great-grandfather, Clinton Coot.

DISNEY YOKAI!? WHAT THE WHAT!? pic.twitter.com/I4rgggdKEW

In case you didn’t catch it, Clinton tells the trio:

“Hold up! Don’t take that alley. Bunch ‘a yokai down there!”

The camera then gives us a peek down the side street where three yokai, creatures from Japanese folktales and mythology, are standing menacingly. On the left is a kappa, a water imp with a bird-like beak and a shell like a turtle, known for their love of cucumbers and their penchant for stealing the source of humans’ life energy through their buttholes. In the middle is a kasa obake, a monopedal monster that disguises itself as an umbrella in order to catch prey unaware (and also to serve as the twist ending for several “And then, he found out the monster he was trying to run away from on that rainy night had been in his hand the whole time!” twist endings to scary stories). The thing on the right is a little harder to pin down, The shape of the head and the red skin resemble an oni, but it’s much smaller in stature than the ogre-like creature are usually depicted, and has only a single eye and horn, whereas oni traditionally have two of each.

Regardless of the third member’s exact identity, though, Clinton is adamant that they’re yokai. “Yokai aren’t ghosts, they’re vicious monsters,” he pops back into frame to say.

While it’s a cool treat for fans of Japanese culture and yokai fans to see Disney tipping its hat to Japanese folklore, what’s really noteworthy is that the scriptwriters chose to have Clinton use the word “yokai,” as-is. He even does an impressive job with the pronunciation, getting the vowels and stress just right even as the Japanese vocabulary word is filtered through his distinct Southern drawl.

@GaijinGoombah wasn’t the only one happy to hear Clinton’s choice of words, as his tweet also caught the attention of Zack Davisson, manga translator whose resume includes work on Ge Ge Ge no Kitaro, Japan’s longest-running, most popular yokai anime/manga franchise.

When I was first working on Kitaro I had a battle with the editor to keep "yokai" as "yokai" instead of goblins or demons of some of the other things it was translated as. I said, just watch, in the future it will be as common in English as samurai or sushi. VINDICATED. https://t.co/7H2IG1EDYY

Advocates have long said that using the term sidesteps the Western religious connotations of words like “demon” or “devil,” and that it’s also a better choice than “ghost,” because while some yokai are undead, others aren’t. Personally, I’ve always thought “monsters” works just fine, but if you’re already dealing with a situation where there are plenty of other such entities running around (like in an animated adventure cartoon), “yokai” is a much more compact, snappy choice than saying “Japanese monsters” every time, and if the exposure to a new word gets some young viewers interested in learning more about yokai, and through them more about Japanese culture and language, that sounds like a nice thing to me.