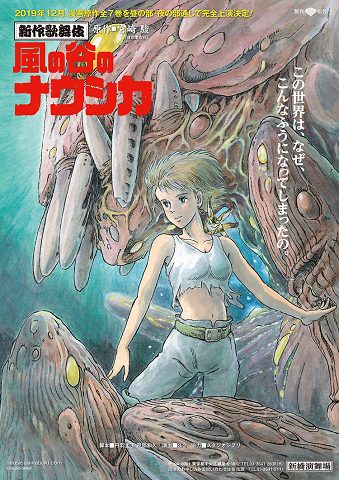 While they’re both representative forms of Japanese storytelling, there’s usually not much crossover between the worlds of anime and kabuki. There’s a huge exception coming up soon, though, in the form of the kabuki adaptation of Hayao Miyazaki’s landmark anime movie Nausicaa of the Valley of the Wind.

What makes the production extra special is that instead of a condensed version of the 1984 film that paved the way for the formal founding of Studio Ghibli, the Nausicaa kabuki play is an adaptation of the complete Nausicaa manga, which ran from 1982 to 1994, and so the kabuki play will include characters and scenes that anime-only fans have never seen before. However, at a press conference in Tokyo promoting the play, veteran Studio Ghibli producer Toshio Suzuki revealed that if certain other people had gotten their way, the kabuki play wouldn’t have been the first live-action version of Nausicaa.

According to Suzuki, there have been multiple offers from Hollywood studios to make a live-action Nausicaa of the Valley of the Wind, but “[Miyazaki] turned them all down, and I thought he wouldn’t like the idea of a kabuki play either, but he was willing.”

Suzuki said that Miyazaki agreed to give Nausicaa the kabuki green light on two conditions:

“The first condition is that the title, Nausicaa of the Valley of the Wind, cannot be changed. The second is that he will do nothing to help with the production, which includes not attending any press conferences.”

While Suzuki shared the behind-the-scenes bargaining with a chuckle, Miyazaki likely had some serious reasons for not wanting Nausicaa’s title altered. Back in 1985, long before anime gained mainstream popularity overseas as a Japanese cultural product or Miyazaki was an internationally honored animation luminary, the Nausicaa film was turned into the heavily reworked Warriors of the Wind for U.S. theatrical release. More than 20 minutes were cut from Miyazaki’s version, and the overall tone was shifted from a thoughtful and cautionary tale about the affects of pollution and aggression to a more conventional action/adventure flick. The backpedaling from Miyazaki’s artistic vision didn’t help Warriors of the Wind at the box office either, and whereas Nausicaa is considered one of the all-time great animated movies in Japan, Warriors of the Wind failed to make any sort of lasting impression with western audiences at large.

While Miyazaki, by his own decree, isn’t involved in the kabuki Nausicaa’s production, it’s unquestionable that the play’s producers are working under a heavy and undeniable sense of obligation to stay faithful to one of the signature works from Japan’s most respected living storytelling artist. Keeping the title as Nausicaa of the Valley of the Wind ensures that Japanese producers won’t do anything with the property that they think Miyazaki wouldn’t do himself.

“This is something I know from spending so much time with Miyazaki: Nausicaa is, to him, his most important work,” explained Suzuki (who actually wasn’t the producer for the Nausicaa anime; that honor goes to Studio Ghibli co-founder Isao Takahata). “Miyazaki truly put his soul, and all of his thoughts, into it.”

Nausicaa of the Valley of the Wind is set to run at Tokyo’s Shinbashi Enbujo theater from December 6 to 25, with tickets going on sale October 19. If you’re a fan of the film, or interested to see what kabuki is all about, why not give it a shot?

Related: Nausicaa of the Valley of the Wind kabuki official website
Source: Eiga.com