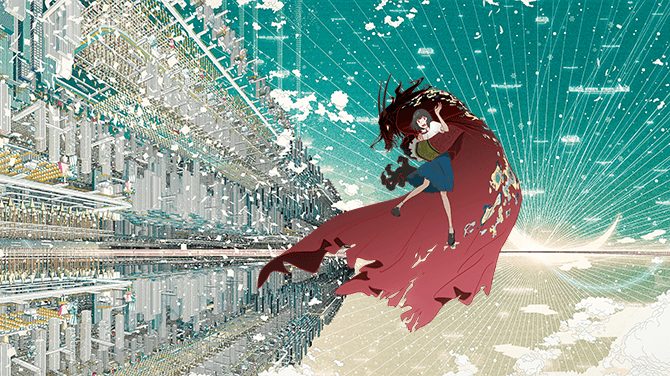 Moreover, staff members behind the movie were also announced, including Akiya Kageichi, who drew the original character designs for “the Dragon”, Takaaki Yamashita (Digimon Adventure: Bokura no War Game) as the chief animation director for the segments of the movie set in the “U” virtual world, Hiroyuki Aoyama (Mirai) as the chief animation director and character designer for the real world segments, Nobutaka Ike (Satoshi Kon’s films) as the background art director, Anri Jojo (Summer Wars‘ “Oz” world art design) for art setting, and Summer Wars CGI artists Ryo Horibe and Yohei Shimozawa as the CGI directors.

As a refresher, here is an overview of the film’s story:

Our protagonist, Suzu, is a 17-year old high school girl, who lives in the countryside of Kochi Prefecture with her father, after losing her mother at a young age.

She loves singing with her mother more than anything else, but as a result of her mother’s death was no longer able to sing.

It wasn’t long before she and her father grew more and more distant from each other, and Suzu closed her heart to the rest of the world.

When Suzu felt that writing music was her only purpose left in life, she then discovers the massive online space known as “U,” where she takes on her persona, Belle.

Another me. Another reality. We are no longer limited to a single world.

Suzu quickly realizes that when she is inside “U” as her avatar, Belle, she can sing quite naturally. As she continues to showcase her own music in the virtual world, she fast becomes the rising star of “U.”

Nonetheless, that surprise is short-lived. Suddenly, a mysterious dragon-shaped creature appears before her…