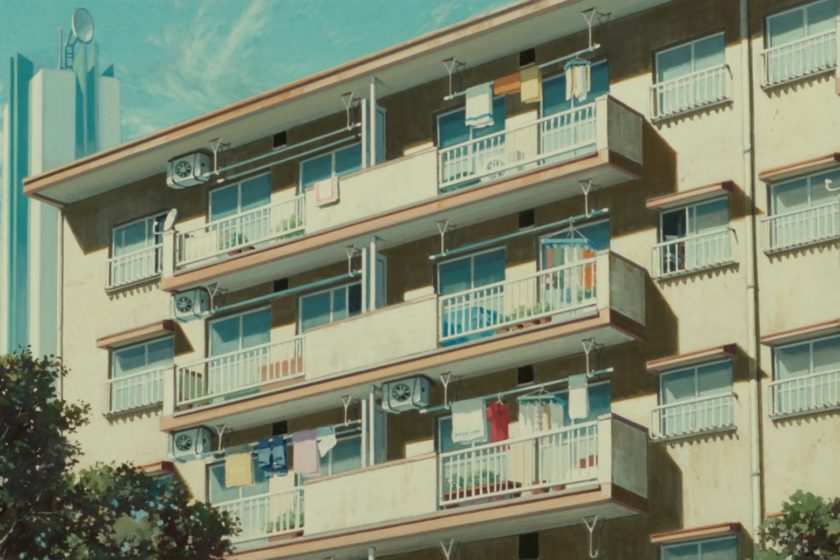 Studio Ghibli released the Whisper of the Heart anime film in 1995, a story of youth following their dreams. The 14-year-old Shizuku often has her nose in a book and her head in the clouds. She aspires to be a writer herself and through her love of stories she meets Seiji, a boy who one day wants to master the art of creating musical instruments. The story takes place against the backdrop of an apartment complex, one that exists in real life.

The Toei Atago Complex wraps around a hill in Tokyo’s Tama City suburb but, unlike its film counterpart, the complex is home mostly to poor, elderly Japanese citizens. A profile on the complex published by The Guardian on Tuesday describes it as a “ghetto for the old.” Atago, and other similar social housing complexes, fill a need for retirement homes in Japan. Approximately two-thirds of residents are over the age of 65 and, like one case described in the article, the apartments become their final resting place.

Resident Kazuyoshi Otsuka moved into the Toei Atago Complex in 1971 when they were still new units. Approximately 15 years later, Otsuka would suffer a subarachnoid haemorrhage that left him paralyzed. His wife and child left him. In 2017, a food deliveryman would notify the police when Otsuka didn’t answer his door at the complex. He’d died alone in his apartment. 20 more residents in Toei Atago would meet the same lonely fate the following year.

The Toei Atago Complex may be filled with elderly residents but it was not designed for its aging population. The five story housing complex has no elevators and there are no nearby grocers or clinics. Residents with limited mobility struggle to reach their homes and the nearest food is at a 7-Eleven convenience store.

The residents interviewed in The Guardian, most in their 70s, live alone. Relatives rarely visit and their neighbors pass away only to be supplanted by another elderly resident.

Social housing units are meant to serve as a safety net for low-income, disabled, and elderly citizens. The units are available to those who qualify based on income and other factors; making too much can get a resident evicted. The result is few young people live in social housing units anymore.

The Tama area government and the Atago community are attempting to fight off the loneliness of its elderly residents. Steps have included more community activities and bringing resources, like a mobile supermarket, to the complex. Food delivery employees are attempting to fill in the gaps of absentee family members. They’ve taken up the grim task of calling the authorities if an aging customer, like Kazuyoshi Otsuka, fails to answer the door.