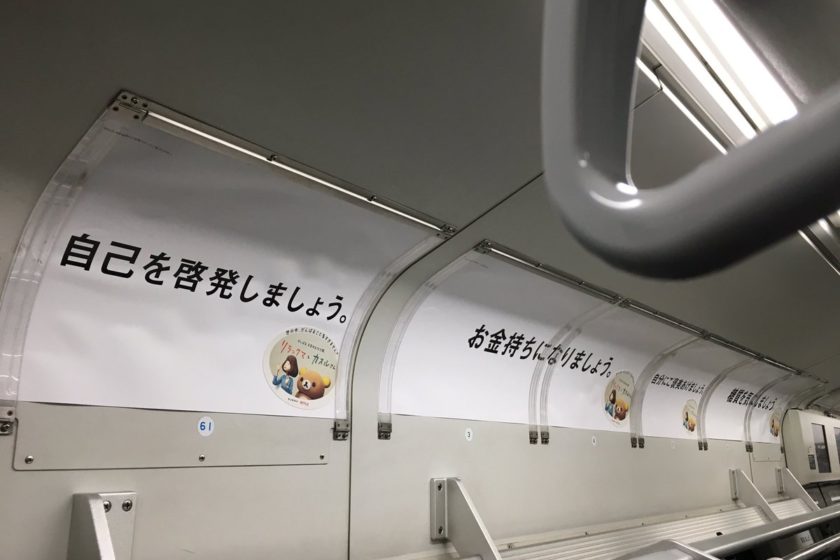 Mass transit ads usually focus on eye-catching graphics. If a company is going to slap an ad on the side of a bus or the wall of a subway station, they want to get as many eyeballs as they can. Like in this manga-themed one we wrote about.

Netflix‘s Rilakkuma and Kaoru anime decided to poke fun at visually loud train ads as a whole. Twitter user Kyōgoro Arai (@Arian_DW) hopped aboard a subway train to find that all the usual ads were gone. In their place were stark white ads with meta-style messages written in black text. The ads read “Follow the latest scandals,” “Work through your cold,” and written in fine print, “Isn’t there too much to do in the world? Why not take 10 minutes and forget about trying your best.”

Each ad had a small image of Rilakkuma and Kaoru in the corner. The approach seems to suggest an almost dystopian outlook on the cheery, motivating ads commuters are bombarded with each day. Instead of focusing on what your abusive employers want, like ignoring your health for the sake of work, Rilakkuma and Kaoru asks commuters to take it easy for once, like Rilakkuma.

The character’s story begins when the titular Rilakkuma suddenly appears in the apartment of office worker Kaoru and begins living there, spending every day idling around. He has a zipper on his back, but the contents remain unknown. He likes food like pancakes, omelette rice, pudding, and dango. He lives together with the little white cub Korilakkuma and Kaoru’s pet Kiiroitori (“yellow bird”).

The Rilakkuma and Kaoru anime premiered globally on April 19.