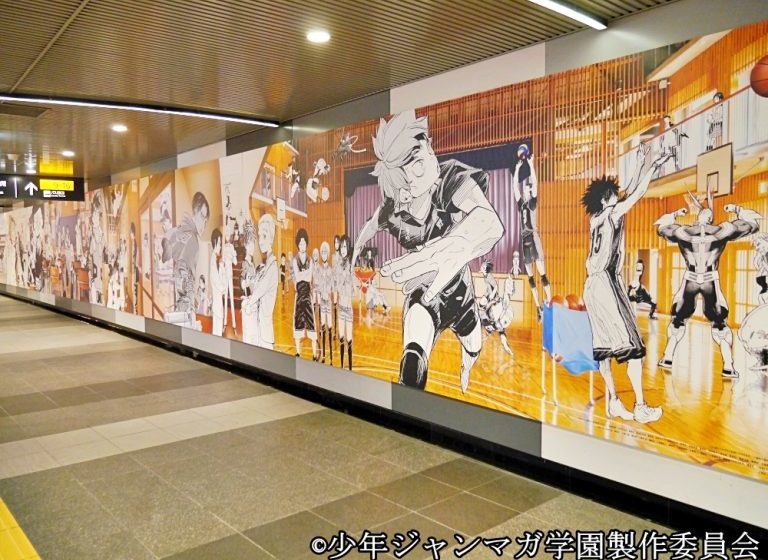 Tokyo’s Shibuya Station is a massive complex. With eight different train and subway lines, operated by three different companies, the entire complex takes up several city blocks, and in order to help passengers move from one gate or platform to another, the whole thing is connected by a series of huge tunnels.

So with all that subterranean walkway wall space, two of Japan’s two biggest publishers decided to create a massive mural starring some of the anime/manga world’s biggest stars.

Shueisha and Kodansha, the publishers of Weekly Shonen Jump and Weekly Shonen Magazine, have decorated a 30-meter (98-foot) length of the Tokyo Metro section of Shibuya Station with artwork from their manga anthologies. The crossover is set against a series of high school backdrops, giving it the effect of a manga yearbook.

▼ It’s the biggest Jumo/Magazine collaboration since the 2,264-page Shonen Jummaga.

With youth sports manga undergoing an extended resurgence in popularity, the gym is filled with student athletes, including the members of the cast of high school volleyball franchise Haikyu!!!

…but the more recognizable faces to Western fans will probably be Attack on Titan’s Connie and the heroic heroes of Heroic Legend of Arslan.

Meanwhile, up on the roof, the preferred spot for emotional or brooding teens in narrative fiction, you’ll notice two old pals…

Of course, there are some other familiar faces atop the schoolhouse, including one fleshless one.

As a matter of fact, the school doesn’t seem to have even the loosest dress code, as clothing itself appears to be optional, depending on the student’s current level of monstrousness.

Still, classes are in session, with My Hero Academia’s Izuku of course in attendance.

Attack on Titan’s real star, Levi, seems to be deciding whether or not class is really worth his time, however.

If you’re looking to check the mural out for yourself, you’ll find it just inside the 7A entrance/exit of Shibuya Station, where it’ll be around for a limited yet undisclosed time, showing that awesome manga art can also be awesome public art.