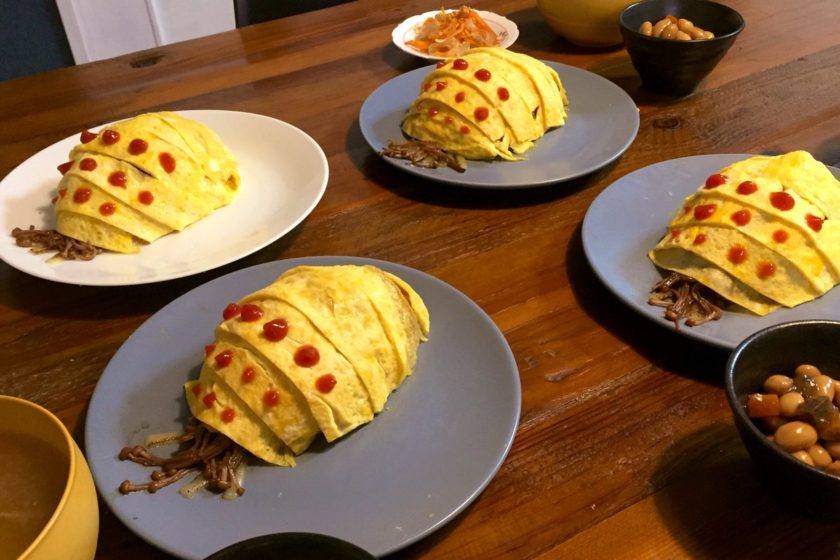 There’s a new trend on Twitter that involves making food inspired by Ghibli monsters, and it all started from one clever father and his groan-worthy dad joke.

Twitter user @fabian0318’s children asked him to make a Ghibli-inspired meal for them and, being a dad, he used the opportunity to make a bad joke. Using the beloved Japanese comfort food of omuraisu (omelet filled with rice) and inspired by the gigantic mutant insect monsters called Ohmu from the very first Studio Ghibli movie “Nausicaä of the Valley of the Wind,” @fabian0318 served four Ohmu-shaped omuraisu, or as the punchline goes: “Ohmu-raisu.”

“Kids: Daddy! Prepare a Ghibli meal for us!

Kids: Daddy, this is wrong. Not this, but like the spaghetti of Cagliostro… or the toast of Laputa…”

The tweet — also featured in our Tweet of the Week series— proves that context is king when it comes to asking dads to do something. If you’re not specific, they will try to make a meal of it inserting a dad joke wherever they can.

Still, it seems that the Twitterverse loves a good pun and after he shared his creation, other people began trying their hand at making a monstrous Ghibli meal, too.

@10tmax04 shared her version of “Ohmu-raisu” above, in which she added spinach to the egg omelet to make it look even more like the real deal.

“If you mix spinach puree in with the eggs, it looks more like Ohmu ( ･ᴗ･ ),” she tweeted.

Finally, proving that nothing and nobody is safe from this trend, even famous Studio Ghibli’s founder Hayao Miyazaki has been made into a bento, complete with sardines for hair and seaweed for glasses.

User @gtx373x tweeted, “My friends and I had a Ghibli-themed bento showdown at work. In the midst of all the Totoro and No-face bentos, one person made a ‘Hayao’ one and it makes me laugh to this day.”

And it looks like we have a winner for ‘Best Dad Joker Taken Too Far’.