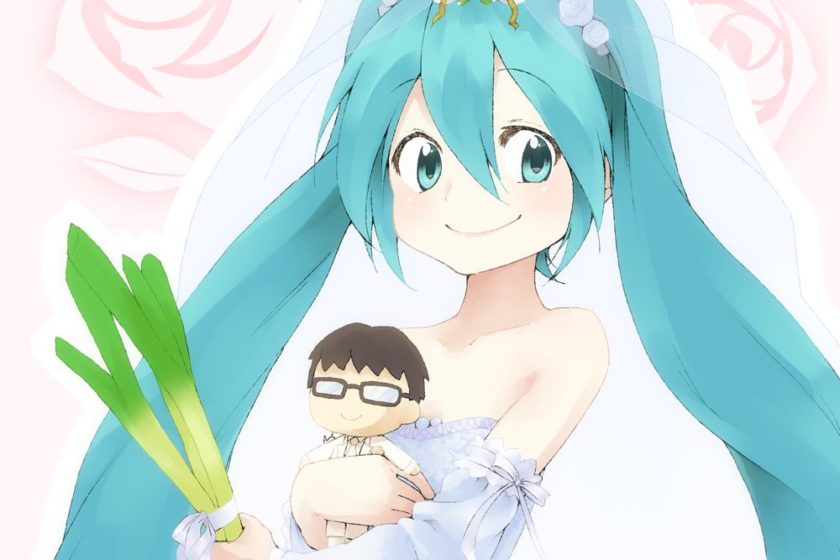 Just like with idol fervor, a person’s love for a particular animated character can make them do some pretty crazy things, like spend tens of thousands of dollars on merchandise like figurines and body-pillows, or to use them as characters in a video game. Thanks, gacha.

However, some people’s love for their characters knows no bounds, going even beyond the fourth wall. Let’s take a look at the stories of Twitter user “Fau” and Akihiko Kondo, whose commitment to their 2D crushes are… well. I’ll let you be the judge of what adjective to use for their cases.

Akihiko Kondo, a 39 year-old school administrator, is a huge Hatsune Miku fan, so it’s no surprise that a big chunk of the tweets he sends out has something to do with the virtual idol. But even by that standard, this message he tweeted earlier this month was… special.

“Tomorrow I’ll finally be having my wedding ceremony with Miku. It was a lot of work, but we’ve been able to get everything ready thanks to the support of so many people. Thank you all so much for all of your help.

Tomorrow is the big day, so I’ll be going to bed early and doing my best to make the ceremony a good one.”

We aren’t talking about some small little make-believe ceremony at the privacy of the guy’s own home here: Kondo threw a full-scale wedding to declare his eternal love for Miku. He even got the two of them dressed up for the occasion and picked Le Crit Amore, an actual wedding chapel located in the heart of Tokyo, for the wedding on November 4. Take a look for yourself if you’re thinking I’m pulling your leg.

Though Kondo has fallen in love with a 2-D woman, he’s not without actual human friends and well-wishers. 39 flesh and blood guests attended the ceremony, including Minoru Ogino (the one whose Tweet is just above), noted otaku politician and assemblyman for Tokyo’s Ota Ward, and Taro Yamada, former House of Councilors member and financial analyst. Yes, actual politicians turned up for the event.

“Next, it’s my turn to support the next person who wants to have a wedding ceremony with Miku or another 2-D character,” Kondo says, magnanimously recognizing that the Miku he married isn’t the only manifestation of the character. He encourages anyone thinking of tying the knot with their anime crush to contact him, and he’ll be happy to provide whatever advice or moral support he can. So yeah… if you happen to love someone in another plane of existence, you know the right guy for the job.

2. Japanese girl says she won’t get married because she loves Frieza too much, so mom delivers a shocking response to wake her up

A Twitter user who goes by the moniker “Fau” loves the Dragon Ball series character Frieza so much, that at the tender age of 19 she boldly declared that she couldn’t (no, not wouldn’t, could not) love anyone else, and would never get married in the future.

However, her mom wasn’t quite as supportive as the 30 odd people who went for the aforementioned wedding with Hatsune Miku. Here’s a Tweet detailing the exchange between mother and daughter:

“I devoted my first love to Lord Frieza, and I loved him so much that when I was 19, I told my mom, ‘I love Lord Frieza so much. I just don’t think I could ever love a human, so I won’t get married. I’m sorry.’ My mom replied, completely seriously, ‘Do you think Lord Frieza, who has the power to destroy entire planets, would ever have feelings for a mere human girl like you?’”

Ouch. I mean, if you were busy trying to destroy the good-guys and exert your superiority over the entire universe, I don’t think you’d be remotely interested in a teenage girl. I mean, unless she’s really, really cute, or if you’re a character in a shounen story. On the bright side, though, at least she can turn to Kondo-san for some relationship advice. (But do you think he’d know what to say to sway the heart of an iconic anime villain?)