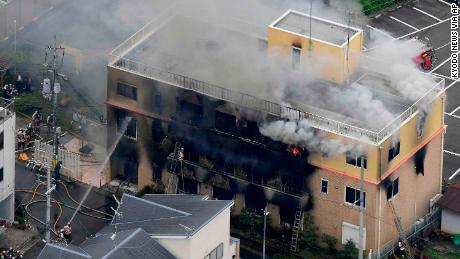 The Kyodo news agency reported on Saturday that the Japanese government plans to tighten rules on the sale of gasoline after the July 18 fire at Kyoto Animation’s Studio 1 building that killed 36 people.

Japan’s Fire and Disaster Management Agency will require gas stations and other gasoline sellers to conduct ID checks and ask customers why they are purchasing the gasoline. The agency said it plans to implement these new rules possibly in February. The agency had requested gasoline sellers to check IDs voluntarily in July, but after some customers declined to do so, the agency will now make the rule mandatory.

The agency stated it hopes the new rules will encourage gasoline sellers to report suspicious customers to authorities.

On July 18, a devastating fire broke out at Kyoto Animation’s Studio 1 building. A total of 70 people were inside the building at the time. The fire killed 36 people and injured 33 others. In addition to those victims, a man in his 40s on his way to work in the area suffered minor injuries from smoke inhalation.

Kyoto Prefectural Police have apprehended a 41-year-old man who allegedly used gasoline to start the fire, and they are investigating the case as arson. The man allegedly bought 40 liters of gasoline in two canisters and used a cart to transport the gasoline to Kyoto Animation’s Studio 1 building. Police have yet to arrest the man as he is still in the hospital recovering from his injuries from the fire. The man is now undergoing rehabilitation and is starting to walk and talk.

Kyoto Animation will hold a public memorial service for the victims of the fire at the Miyako Messe event hall in Kyoto on November 3-4.