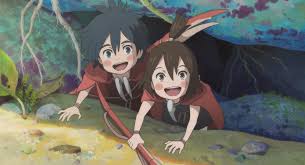 Studio Ghibli fans, heads up: an anthology of not one, not two, but three entire animated shorts featuring people who worked on famous Ghibli films is on its way!

GKIDS began streaming a for it and Fathom Events’ screening of Studio Ponoc’s anthology film Modest Heroes: Ponoc Short Film Theater, Volume 1 on Monday. The clip is from “Life Ain’t Gonna Lose“, one of the film’s three shorts.

The film opened theatrically in Japan on August 24. The anthology consists of three shorts that Studio Ponoc describes as “tales of modest heroes of our times.”

Hiromasa Yonebayashi, who directed the studio’s previous Mary and The Witch’s Flower film and Studio Ghibli’s When Marnie Was There, directed the 15-minute fantasy adventure story “Kanini & Kanino” about two crab siblings. The short is Yonebayashi’s first original story.

Yoshiyuki Momose directed “Life Ain’t Gonna Lose“, a 15-minute “human drama” (based on a true story) showing the love between a mother and a boy. Momose previously worked closely with Ghibli director Isao Takahata in various roles on his films Grave of the Fireflies, Only Yesterday, Pom Poko, and The Tale of the Princess Kaguya, including as animation director, storyboarder, visual design, and special scene design.

Akihiko Yamashita’s “Invisible” is a 14-minute “action spectacle” that centers on the lonely struggle of one invisible man. Yamashita previously worked in various roles in Hayao Miyazaki’s films at Ghibli, including as animator, animation director, character designer, animation supervisor, and assistant director for such films as Spirited Away, Howl’s Moving Castle, Ponyo, and The Wind Rises.

Do you get the Ghibli vibes from the trailer? I sure did.