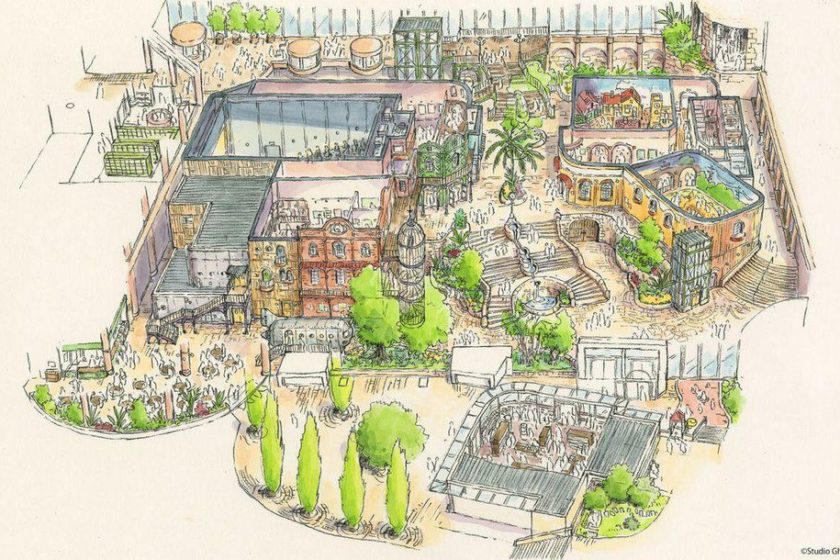 Studio Ghibli revealed more details and concept design illustrations for its planned Ghibli Park on Tuesday. The illustrations show the planned layout of the Ghibli no Daisōko Area (Giant Ghibli Storehouse) and Seishun no Oka Area (Hill of Youth).

The first illustration below shows a part of the Ghibli no Daisōko Area that recreates the restaurant district from the beginning of the Spirited Away film. The third illustration shows the Seishun no Oka Area, which will also contain the “Neko no Jimusho” (Cat’s Office) attraction modeled after the film The Cat Returns. The fourth illustration provides another view of the Seishun no Oka Area, showing the elevator structure in the area that takes design motifs from Castle in the Sky and Howl’s Moving Castle. Both areas, as well as the Dondoko Mori Area (Dondoko Forest), are slated to open in fall 2022, followed by the Mononoke no Sato Area (Mononoke Village, inspired by Princess Mononoke) and Majo no Tani Area (Witch Valley, inspired by Kiki’s Delivery Service) about one year later. The Dondoko Mori Area will feature a recreation of the shrine and path from My Neighbor Totoro.

Aichi Prefecture agreed in May 2017 to establish the park, and confirmation documents were finalized this past March. The project’s planners then revealed the basic design plans in April 2018. The park was initially planned to open in 2020. Studio Ghibli and the Chunichi Shimbun newspaper jointly established the Ghibli Park, Inc. company that will be responsible for the management and operation of the park.

The prefecture is aiming to make the park an attraction for both foreign and domestic tourists. Both Studio Ghibli and the prefecture are funding the operating company that will be in charge of the park.

Studio Ghibli also maintains The Ghibli Museum, located in Mitaka in west Tokyo. The Ghibli Museum has interactive exhibits and replicas of iconic Ghibli creations, and it offers a rotating screening of different Ghibli-animated shorts.

Studio Ghibli previously revealed concept illustrations for various areas of the park, as well as the layout of the park.