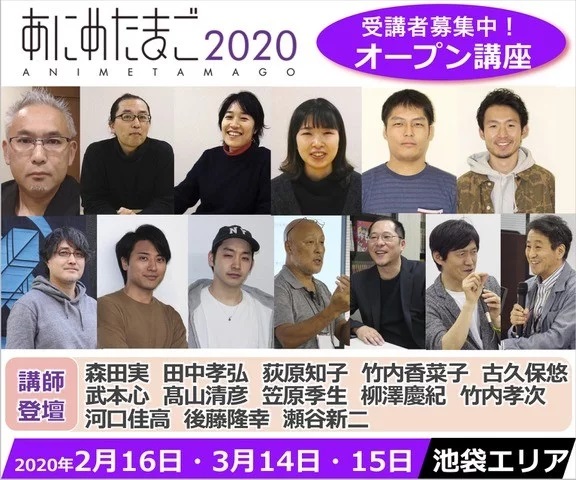 The Anime Tamago project will hold four open lectures in February and March for aspiring young animators. The free lectures will be held by experienced members of the anime industry. The first lecture will be held on February 16 with the theme of drawing action. The lecturer will be Minoru Morita, an animation director on Bleach and Naruto.

The second lecture will be held on March 14 with the theme of showing the results of the Anime Tamago project. Various producers and animators who participated in previous Anime Tamago project will talk about their experiences and their current work in the anime industry.

The third lecture will also be held on March 14. Its theme will be explaining terms used in the anime industry such as “key pose” and “blocking.” The lecturer will be anime producer Kōji Takeuchi (O-jii-san no Lamp, Lupin the 3rd: Blood Seal of the Eternal Mermaid).

The fourth lecture will be held on March 15 with the theme of animation character designs and the role of chief animation directors. The lecturers will be Production I.G animator Takayuki Goto (Ghost in the Shell: Stand Alone Complex, Kuroko’s Basketball) and Tezuka Productions‘ Shinji Seya (Astro Boy, Black Jack: Child from the Sky).

The Japanese government’s Agency of Cultural Affairs launched its “Young Animator Training Project” in 2010 with the aim of fostering the growth of domestic animation studios, and tackling the concern that more of the Japanese animation process is being outsourced overseas. The project has spawned such works as Little Witch Academia, Death Billiards (which inspired the Death Parade television anime), and Ongaku Shōjo.