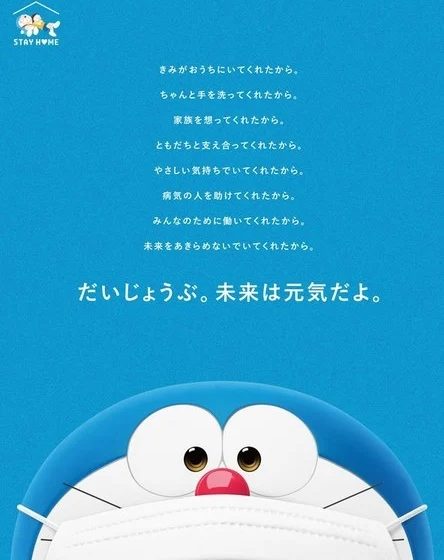 Wednesday’s issue of the Asahi Shimbun newspaper has a heartfelt message from Doraemon, the time-traveling robot cat. The message is translated approximately into English as follows:

Because you stayed at home

Because you made sure to wash your hands

Because you thought of your family

Because you and your friends supported each other

Because you were kind

Because you helped the ill

Because you worked for all our sakes

Because you never gave up on the future

It will be okay. The future is healthy. The message is part of a broader initiative from the Fujiko F. Fujio Museum called “Doraemon Stay Home Project,” which encourages people to self-isolate in order to curb the spread of COVID-19. The project so far has involved releasing chapters of the Doraemon manga for free, as well as an online game, coloring pages, study guides, smartphone and PC-compatible wallpapers, and background images to use for video calls. Going forward, the project will distribute free posters to display at shops and restaurants, as well as more images for video calls.