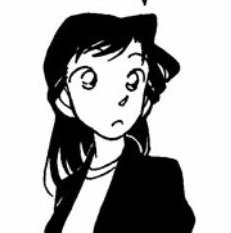 Within the anime universe, Detective Conan‘s Ran Mori (Rachel Moore in the English dub) has an iconic hairstyle consisting of a large pointy structure jutting off the left side of her head. While most people would probably chalk it up to anime hair physics and not even think twice about it, Japanese Twitter user @takumitoxin was recently determined to solve the mystery of the pointy ‘do once and for all. After all, “There’s only one truth,” right, Conan?

Here are some of @takumitoxin’s deductions after going on a viral Twitter showerthought:

“This is what that tapered part of Ran’s hair is supposed to be, right?”

“I’m more curious about the hair around her ears. think it’s supposed to be like [Japanese pop singer] Shizuka Kudo’s wispy locks.”

Takumi, the original poster, further elaborated on her Tweet,

“In the beginning, her part on the left-hand side was clearly defined, but after a while it seemed to morph into a visual symbol and became more pronounced and simplified.”

“In the anime, they added highlights in front of her part, and the pointy section seemed to gain complete independence and became hard to analyze.”

And then there were other Japanese Twitter users who were simply passing-by and entertained by the series of thought-provoking tweets over such an unexpected topic, and left their own amusing comments:

“After all these years, the mystery of Ran’s pointy hair has been solved.”
“Thank goodness it wasn’t her skull.”
“I’m still convinced that it’s a drill.”
“The pointy hair is a symbol of her strength.”
“His analysis is so detailed, LOL”

I guess the truth behind Ran’s hair will forever be a mystery. But hey, I personally believe that the bigger mystery is how on earth Yugi’s hair from the TCG anime series Yu-Gi-Oh! Duel Monsters works. I mean, look at these… layers?

More importantly, how does his hair change and his body become taller when he gets a personality switch?!