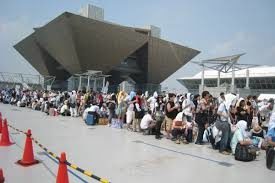 The Comic Market (Comiket) 97 event in Tokyo drew about 190,000 people on its fourth day on Tuesday, December 31, bringing the total to 750,000 across all four days. As only the second time in its history that it ran for four days, the event broke its winter and all-time attendance records.

Comiket 96 and 97 both expanded to a record four days. Both times, the event was also held across two locations, separated by a 15-minute walk. The organizers of the event have implemented a policy for Comiket 96 and 97 where attendees must purchase a wristband for 500 yen (about US$4.60) or buy the event’s catalog (with wristbands included) to be able to attend the event each day. The wristband color changes daily.

Comiket 98 will run during Golden Week from May 2 to May 5 in 2020 instead of the usual August. The event’s usual Tokyo Big Sight venue will serve as the main press center and international broadcasting center for the 2020 Tokyo Olympics from July 24 to August 9, 2020.