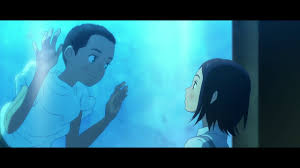 The official website for Studio 4°C’s anime film of Daisuke Igarashi’s Children of the Sea (Kaijū no Kodomo) manga began streaming the first full trailer for the film on Tuesday.

Composer Joe Hisaishi of Studio Ghibli fame commented on the appeal of the film and the challenges on working on its soundtrack. He described the story as both unpredictable and philosophical. He thought the soundtrack was quite challenging as it permeated the entire film, but with a minimal music style. He added that the film inspires the viewer’s imagination with the faint whiff of the universe’s memories and the effervescence of life.

Viz Media published the manga in English, and it describes the story:

When Ruka was younger, she saw a ghost in the water at the aquarium where her dad works. Now she feels drawn toward the aquarium and the two mysterious boys she meets there, Umi and Sora. They were raised by dugongs and hear the same strange calls from the sea as she does.Ruka’s dad and the other adults who work at the aquarium are only distantly aware of what the children are experiencing as they get caught up in the mystery of the worldwide disappearance of the oceans’ fish.

The film will open in Japan on June 7. GKIDS will screen the film theatrically in North America in Japanese and English in 2019.

Igarashi launched the manga in Shogakukan’s IKKI magazine in 2007, and ended it in 2011. Shogakukan published five compiled book volumes for the manga, and Viz Media published all five volumes in English. The manga earned nominations and awards of excellence from the 38th Japan Cartoonist Awards, the American Library Association’s Young Adult Library Services Association, the School Library Journal, and the 13th Japan Media Arts Festival Awards.