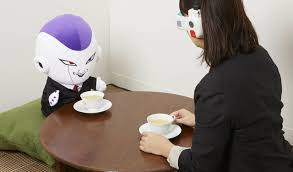 It might surprise you to know that quite a few people would actually like to work for a genocidal alien like Frieza. Men voted him as their top choice for an anime boss and he ranked third overall in the same poll. Another poll found that if fans had to pick a villain to be their best friend, well they’d choose Frieza for that too!

His popularity as a top-ranking salaryman has inspired LINE stamps of the Dragon Ball Z villain in a business suit. Premium Bandai upped the ante by creating actual boss Frieza merchandise. The computer cushion Frieza will help make sure you stand up straight and maintain good posture while researching which planet to conquer next. The stuffed toy is about 45cm high and comes with his own detachable keyboard that serves as a wrist cushion. The price is 5616 yen (US$50.50. Premium Bandai is accepting pre-orders now and the items will be shipped to buyers in August.