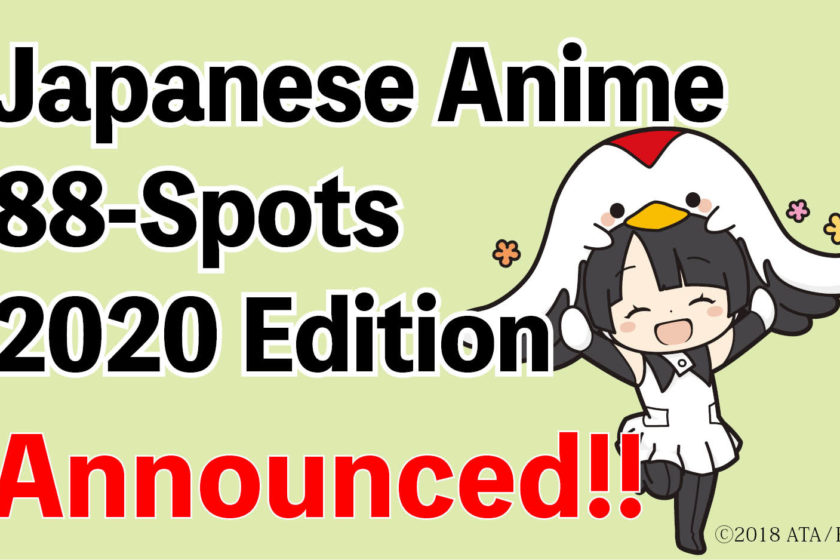 The Anime Tourism Association revealed its 2020 list of noteworthy anime pilgrimage sites at a press conference on Tuesday. The results are based on a poll conducted on the Anime Tourism Association’s website from June to September this year. Despite naming itself after the Shikoku’s 88 Temple Pilgrimage, the list has 111 anime setting locations and 26 anime-related institutions/events.

This year’s list features over 12 new additions, listed below:

The Association revealed statistics from the poll indicating the popularity of the project overseas. For the 2018 list, 60% of voters were from outside Japan. The percentage increased to 75% for the 2019 poll. For the 2020 list, the percentage decreased to 63%.

The top five foreign territories represented in the 2020 poll were China, Hong Kong, Taiwan, the United States of America, and Thailand. In 2019, South Korea was in the top 5, but for the 2020 poll, it dropped to number 15. Recent political tensions between South Korea and Japan may be related to the sudden drop in travel interest. On the other hand, Western countries have been enjoying greater representation, with the United States, the United Kingdom, and Canada all making the top 10.

Chinese anime pilgrimage fan and influencer Ruǎn Ruǎn Bīng appeared at the event as a guest to give some insight into the Chinese anime pilgrimage community. She said that Chinese people don’t tend to go camping, and that Laid-Back Camp inspired her to go camping for the first time ever. She also shared photos from her recent trip to the town of Tonoshō in the Kagawa Prefecture, which was featured in Karakai Jōzu no Takagi-san 2.

The mayor of Tonoshō spoke about how the anime boosted tourism in the area. He revealed that at first, the people in this small town didn’t actually know much about Karakai Jōzu no Takagi-san, but they came to know about it through all the visitors coming in because of the anime. The Komatsu city mayor Shinichi Takemura mentioned that the Girly Air Force anime tripled the number of visitors the city normally receives.

The 88 anime pilgrimage concept is modeled on Shikoku’s 88 Temple Pilgrimage, Japan’s most famous Buddhist pilgrimage route. The Anime Tourism Association was founded in 2016 as a partnership between Kadokawa and various tourism and travel companies. Their aim is to attract tourists, from Japan as well as foreign countries, and bolster regional revitalization projects throughout Japan.

The 2018 list was criticized online for its lack of transparency about the internal selection process and the unexplained gaps between what titles the fans voted for and what made it to the final list. Tsuguhiko Kadokawa, chairman of the Kadokawa Corporation and the Anime Tourism Association, said that in 2018 there was some difficulty in getting the rights cleared with all the Intellectual Property owners within a short space of time, but claimed that they were able to rectify that issue from 2019 onward.

The full list of the 2019 results can be accessed here (link in English).