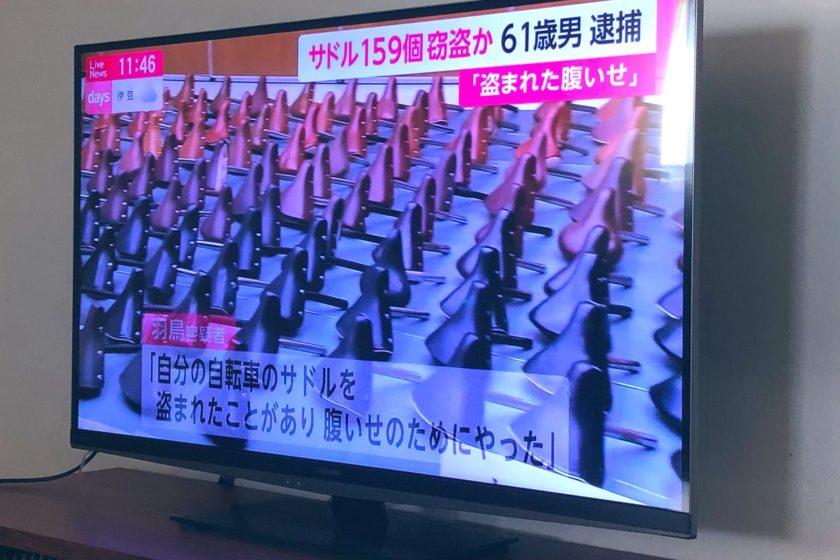 Last summer, 61-year-old Akio Hatori, who lives in Tokyo’s Ota Ward, had a bad day. See, he wanted to head out on his bicycle, but someone had stolen the seat.

Obviously, he then had to buy a replacement seat, and while that’s thankfully not such a huge expenditure, Hatori was still incredibly upset about the incident, and it’s not hard to see why. It’s not like there’s a lucrative bicycle seat black market, nor are they the sort of things you might find yourself suddenly in need of while out and about, thus finding yourself tempted to steal one as a way out of your desperate distress. No, really the only reason to steal a bicycle seat is to be a jerk and annoy someone else. Psychologically it’s arguably as much vandalism as it is theft, and it’s understandable that Hatori would remain pretty pissed off about the whole thing.

Even when fall rolled around, Hatori still wasn’t over his anger, and so he decided to take action. So did he use the intelligence and network of personal contacts he’s acquired over the course of his life to track down the thief? Did he hop on his newly reseated bicycle and patrol the neighborhood, hoping to prevent other forms of low-level street crime?

Nope. He just started stealing a bunch of other people’s bicycle seats, and when we say a bunch, we mean 159 of them.

This week, officers from the Tokyo Metropolitan Police Department’s Kamata Precinct arrested Hatori in connection to a bicycle theft that took place in Ota Ward on August 29, after analysis of security camera footage showed him removing the seat and placing it in the basket of his own bicycle before riding off. Other footage showed Hatori riding his bike with multiple removed seats in the basket, and a subsequent search of his home revealed that he’d been keeping the ill-gotten items, holding on to all 159 of them.

The fact that Hatori hung on to each and every seat might make it seem like he was stockpiling them to use as replacements should his own seat get stolen again, but it turns out that’s not the case. In speaking to investigators, Hatori, who has admitted to the thefts, said “I wanted other people to feel what I had gone through, and I stole the seats as a form of revenge.”

Setting aside the question of whether something counts as “revenge” when you’re targeting someone other than the person who originally wronged you, it’s sad to see Hatori chose to continue spinning the wheel of bicycle seat theft anger and sadness, not only because he should have known better than anyone how upset the victims would be, but also because should each of them choose to deal with their anger in the same way, he’d be indirectly responsible for 25,281 additional thefts. In the future, hopefully Hatori will find more acceptable ways of dealing with his negative emotions.