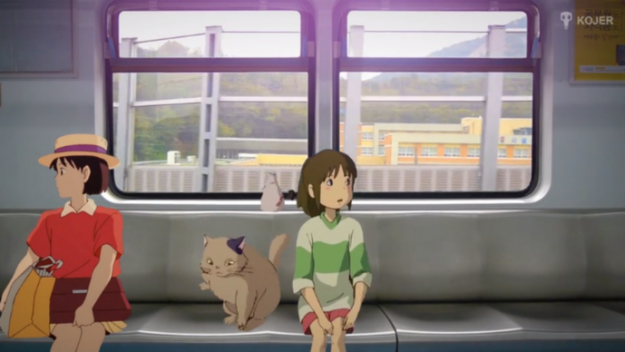 Studio Ghibli films are some that remain with you for the rest of your life after you view them. You’ll always remember Kiki’s Delivery Service or My Neighbor Totoro, for instance, and you’ll probably always be afraid of tall, dark shadowy figures that look as though they’re wearing masks. Part of what makes these movies so memorable are their environments, characters, and their connections to the real world.

That’s why these works from visual artist Kojer are so fascinating. They take familiar characters from the Ghibli movies you love and mix them with footage filmed at real locations in places like Japan and Korea. He painstakingly scouted out real-world areas to insert the animated characters where they looked like they might best fit in, and the result is a breathtaking set of characters juxtaposed against places you can go to in real life. Even the coloring seems to match impeccably, a testament to Kojer’s prowess here.

From Pazu and Sheeta looking into a fountain with their reflections staring back at them to watching Chihiro interact with Spirited Away’s No Face on a train, you can see how much work went into making these images believable. If you’re a fan of one or all of these movies, there’s a lot to appreciate here.

Check out the video below to see the animation in action, with Totoro floating over the city to Kiki headed through the city on her bike. The swooping effect scene as we shift throughout the city and the Kodama looking on are especially good touches, as is the somewhat heartrending music that punctuates every scene. Though it’s clear the movie is meant to be uplifting, don’t be surprised if you come away with more than a few tears in your eyes, both in terms of nostalgia and childlike wonder. Just imagine what the world would be like if these characters were real. What a world it would be.