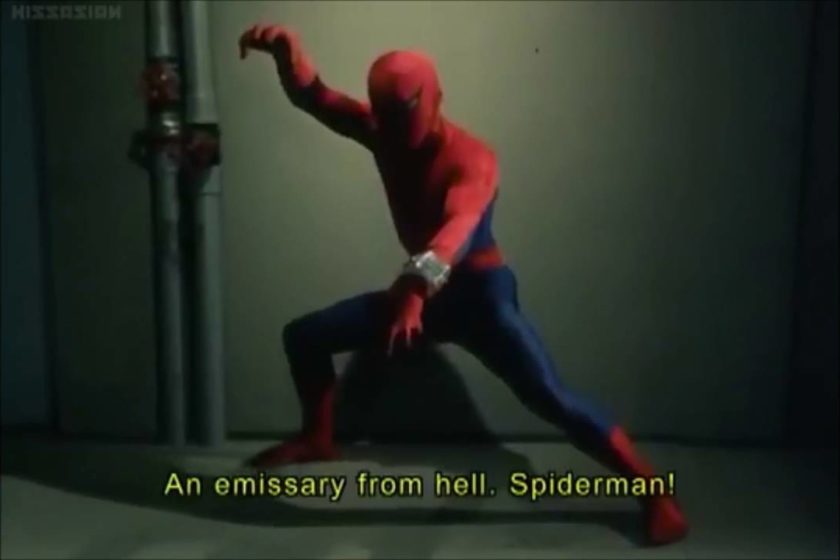 Into the Spider-Verse, a graffiti-splattered, star-studded journey through various Spider-Man universes, swung into U.S. cinemas last year. Audiences marveled at the fast action, snappy comedy and numerous nods to Spider-Man’s extensive 57-year canon. The film took a little longer to make it across the Pacific, but after its Japanese premier in March 2019, fans in Japan too could watch the adventures of Miles Morales, Gwen Stacy, multiple Peter Parkers, and Japanese-American Peni Parker.

But Peni, who made her comic book debut in 2014, isn’t the first Japanese Spider-Man. You see, in the 1970s Toei commissioned their very own live action Spider-Man series, and it’s something of a nostalgic classic among Japanese and international audiences alike. We’ve examined its brand of over-the-top superhero camp in great detail, and have come to the conclusion that protagonist Takuya Yamashiro is an unsung hero among Spider-Men, Spider-Women and all Spider-Beings in the Spider-Verse.

Explore Toei #SpiderMan's weird and wonderful gadgets in this bonus clip of #EarthsMightiestShow! What gadget would you want to try? pic.twitter.com/S8hmE7wLE4

But that “unsung” status may be set to change. When the sequel to Into the Spider-Verse was recently announced on Twitter, fan Shannon Tindle (who’s also the character designer for Kubo and the Two Strings and The Croods) immediately fired off a tweet about the character he most wanted to see.

Now that you’ve announced Spidey 2, IF, through some miracle of miracles, Japanese Spider-Man is written into the film, I will happily design him for you.

Almost two hours later, a reply came from Into the Spider-Verse producer Phil Lord himself.

The reaction from Spider-Man aficionados was one of almost unanimous delight. GIFs of Takuya striking his infamous “emissary of hell” pose filled the comments, and fans clamored underneath Lord’s reply to promote their personal favorites in the lesser-loved Spider-Man gallery.

AN EMISSARY FROM HELL — SUPAIDAMAN pic.twitter.com/KHNk3YkM44

Is there any possibility for Shinji Tōdō to reprise his role as Takuya? pic.twitter.com/9RumEG0i02

Japanese responses to the announcement were laser-focused on one thing, by contrast…

“Does this mean Leopardon will be in it too?”
“Leopardon needs to show up if they want it to really feel like Toei Spiderman.”
“Is Toei Spider-Man canonically the strongest one when he’s inside Leopardon?”

Information on the sequel is still scarce, other than its proposed release date, which doesn’t get more specific than the year 2022. Tindle’s later tweets claimed he thought Lord was joking, to match the humor in his initial tweet — but judging from the intense positive reaction, the Emissary from Hell is in high enough demand that he really could be a star. And if he is, he’d better bring that robot!