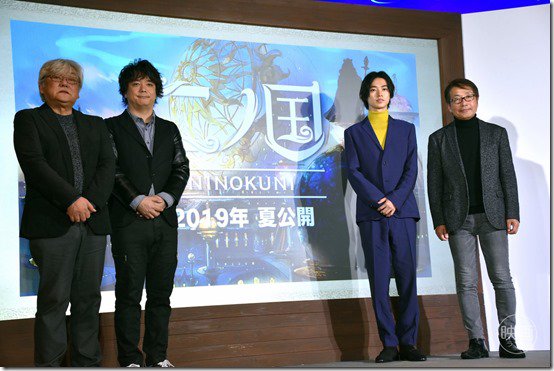 Warner Bros. Japan began streaming a teaser video on Sunday for it and Level 5’s Ni no Kuni anime film. The video then gives highlights from the press conference on Saturday that revealed the film.

The film will debut this summer.

The movie stars actor Kento Yamazaki (live-action Death Note‘s L, live-action Orange‘s Kakeru Naruse) as the protagonist Yū (pictured below). Yū is a prodigy who is top of his class, and he uses a wheelchair to get around. He has kept his feelings for his childhood friend Kotona secret from her. His best friend Haru is dating Kotona. Yū’s best friend Haru (below left) is popular and the ace of the school’s basketball team. Kotona (right) is a high school student who is innocent and liked by everyone. The film will feature an original story in which through a certain incident, the three friends are able to travel back and forth between reality and “another world” Ni no Kuni. When the life of the Kotona in both worlds is simultaneously put in danger, the three friends must make “the ultimate choice.”

Yoshiyuki Momose (The Legend of the Galactic Heroes character designer, Only Yesterday and Pom Poko storyboarder) is returning from the game series to direct the film, and Hayao Miyazaki’s longtime collaborator Joe Hisaishi (Nausicaä of the Valley of the Wind, Princess Mononoke, Spirited Away) is returning to compose the music. Level 5 CEO Akihiro Hino is the executive producer and scriptwriter, and he is also credited with the original work. OLM (Pokémon, Inazuma Eleven franchises) is animating the film. Warner Bros. Japan is the distributor.