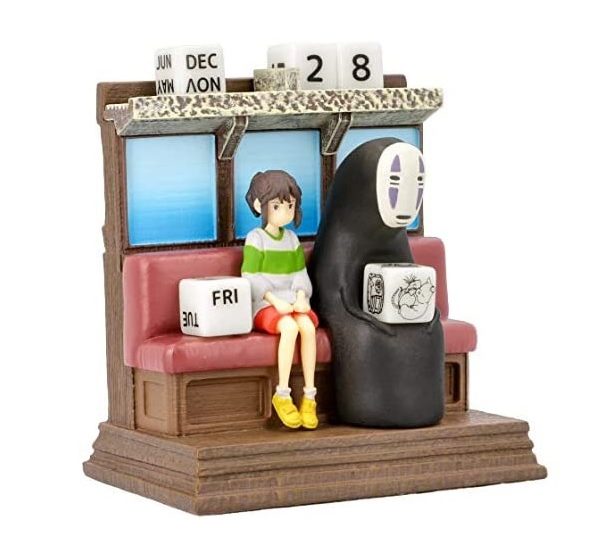 Bluefin, the official distributor of Ghibli merch in North America, offers a ton of adorable products via Amazon, and right now, new products are up for pre-order that any Ghibli fans will be dying to buy (trust me, I’m with you.) As with all licensed Ghibli merch, these products aren’t cheap, running between $40 and $50, but you can expect them to be higher quality; plus, they make great gifts. Take a peek at some of the upcoming products below!

This tiny Totoro features a Daruma symbol, which stands for good luck and encouragement, on his chest along with a little Daruma doll.

Kiki is bored out of her mind waiting on her next delivery in this little figurine that also functions as a calendar. Approximately 4.5 inches tall, the figurine depicts Kiki and her sidekick Jiji tending the bakery.

Spirited Away’s iconic scene where Chihiro and No Face take the train to visit Zeniba at Swamp Bottom is captured in this calendar figurine. No Face holds one of the dice, and you can see adorable little drawings of Yu-Bird and Baby Boh, a basin, a soot sprite, and other callbacks to the film.

If you’re a fan of My Neighbor Totoro, you’ll definitely recognize the reference to the scene where Big Totoro and his smaller Totoro friends fly through the forest to a tree where they play their acorn flutes. This calendar depicts that adorable moment and also includes a special dice with drawings of Catbus, Small Totoro holding a bag of acorns, and more.

Castle in the Sky’s most striking imagery is of the dilapidated flying city of Laputa overgrown by grass, trees, and roots after years of being abandoned by people. This planter captures that image of nature persisting even after destruction; plus, it just looks neat to have a plant sitting in this damaged robot soldier head.

Which merchandise are you planning to get? Let us know in the comments!