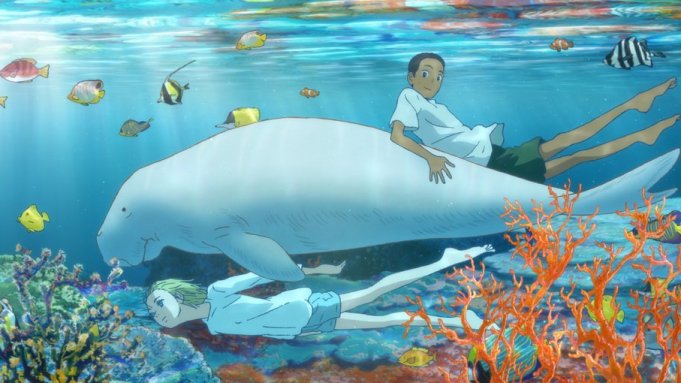 GKIDS and Shout! Factory announced on June 15 that they will release Studio 4°C’s anime film of Daisuke Igarashi’s Children of the Sea (Kaijū no Kodomo) manga on Blu-ray Disc and DVD on September 1.

All home video releases will include bonus features such as an interview with director Ayumu Watanabe and CGI director Kenichiro Akimoto, as well as a separate interview with composer Joe Hisaishi. The Blu-ray Disc and DVD combo pack release will also include the exclusive “Turep – Looking for Children of the Sea” pseudo-documentary.

When Ruka was younger, she saw a ghost in the water at the aquarium where her dad worked. Now she feels drawn toward the aquarium and the two mysterious boys she meets there, Umi and Sora, who were raised by dugongs and hear the same strange calls from the sea as she does. As the kids get caught up in the mystery behind the sudden worldwide disappearance of the ocean’s fish, they uncover cosmic connections that will change them forever.

Watanabe (Space Brothers, After the Rain) directed the film, and Kenichi Konishi (Tokyo Godfathers, The Tale of the Princess Kaguya) was the animation director and character designer. Hisaishi of Studio Ghibli fame composed the music for the film.