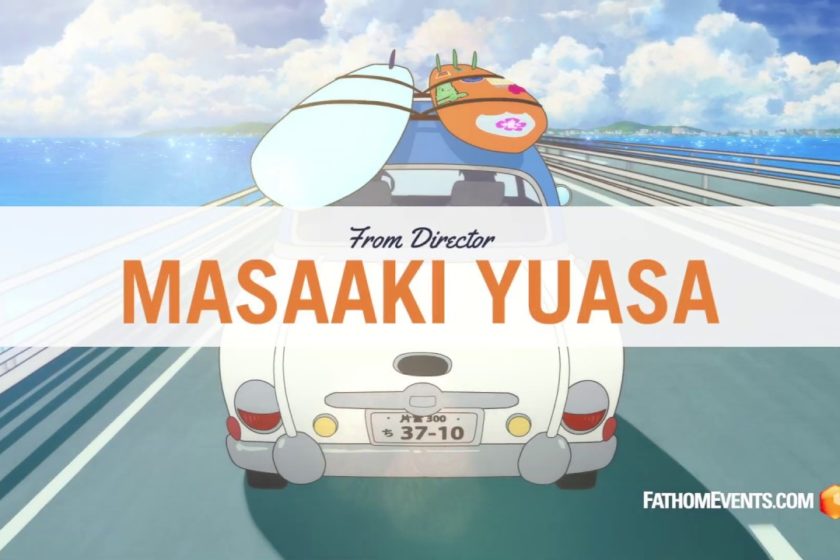 Fathom Events confirmed on Friday that it will screen Masaaki Yuasa‘s Ride Your Wave film in the United States on February 19 for a one-night-only screening. The screening will be in Japanese with English subtitles. The company is streaming an English-subtitled trailer for the film, and is also listing theater locations on its website.

Several theater chains had been listing earlier this week that they would screen the film on February 19. GKIDS describes the film:

From visionary director Masaaki Yuasa (The Night is Short Walk On, Girl, DEVILMAN crybaby) comes a deeply emotional new film that applies his trademark visual ingenuity to a tale of romance, grief and self-discovery.Hinako is a surf-loving college student who has just moved to a small seaside town. When a sudden fire breaks out at her apartment building, she is rescued by Minato, a handsome firefighter, and the two soon fall in love. Just as they become inseparable, Minato loses his life in an accident at sea. Hinako is so distraught that she can no longer even look at the ocean, but one day she sings a song that reminds her of their time together, and Minato appears in the water. From then on, she can summon him in any watery surface as soon as she sings their song, but can the two really remain together forever? And what is the real reason for Minato’s sudden reappearance?

The film opened in Japan on June 21 and ranked at #9 in its opening weekend. GKIDS announced its license of the film in July.

Masaaki Yuasa directed the film at his Science SARU studio. Reiko Yoshida (Lu over the wall, A Silent Voice, Liz and the Blue Bird) wrote the film’s script, and Michiru Oshima (Patema Inverted, The Night is Short Walk On, Girl) composed the music.