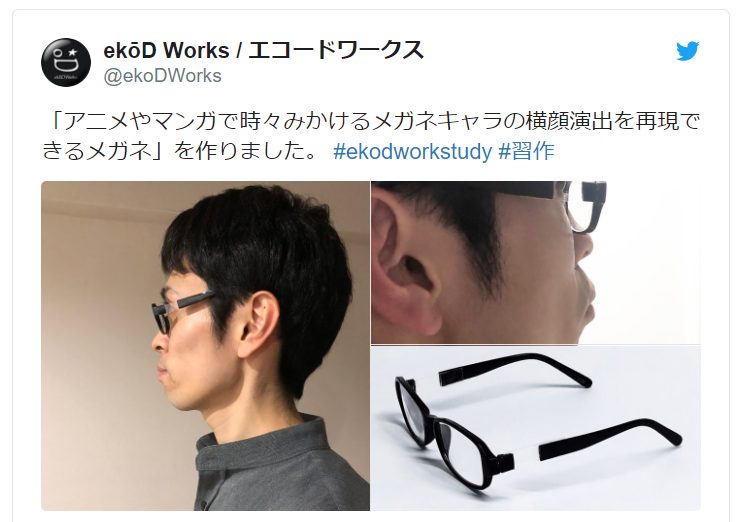 Pretty much all animation is stylized to a degree, but anime is especially committed to the concept of “If it looks cool, go for it.” That’s how we ended up with such distinct visual calling cards as huge anime eyes, vividly colored and spiky anime hair, and those snazzy anime glasses.

While it doesn’t show up in each and every series, there’s a pretty common trick where animators will simply leave out a portion of the temple (the fold-out parts) of a character’s eyeglasses, right about where the hinges connect them to the rest of the frame.

This is usually done when showing the character’s face in profile, and it makes it look like the glasses are somehow floating. However, it keeps the character’s eye from being visually obstructed, allowing the artist to better convey emotion while also making any movement of the eye easier to animate.

Of course, this is just another of anime’s many, many breaks with reality, and isn’t possible with real glasses, right? Don’t be so sure, because Japanese fashion company ekoD Works recently tweeted out photos of its newly designed anime glasses!

In keeping with anime norms their full name is incredibly long: “Glasses that Can Recreate the Art Direction of Glasses-Wearing Characters Sometimes Seen in Anime and Manga.” In particular, the company says it was inspired by the frequently floating specs of Akita Takagi and Osamu Mikumo, from the Bakuman and World Trigger franchises, restively.

However, while Takagi, Mikumo, and their brethren’s glasses are held in place by sheer stylishness, ekoD Works’ real-world anime glasses have to obey the laws of physics, so their temple pieces are entirely solid, but with a transparent section up by the hinges.

The glasses have gotten an extremely positive reaction online, with a steady stream of comments along the lines of “You guys are geniuses” and “I totally want a pair of these.” It’s not just anime fans saying that either, as a number of commenters are from people saying that eliminating the wearer’s blind spots makes the design not just stylish, but practical too.

The eyewear isn’t quite ready to make it to market yet, though. The photos show a rough prototype ekoD Works threw together with parts from the 100 yen store, and the company says it needs to design a higher-quality unit that looks nicer close up before offering it for sale. That should also give it time to think up an official abbreviated nickname for the Glasses that Can Recreate the Art Direction of Glasses-Wearing Characters Sometimes Seen in Anime and Manga, in order to give them even more otaku cred.