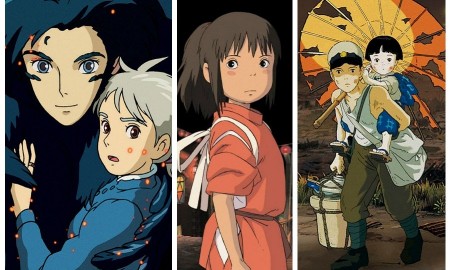 Who said that cartoons or animated movies are only for kids? Here’s a genre of animated films that are mainly about children but their target audiences are both, children and grown-ups. Confused? Does the phrase “Japanese animated movies” ring any bells? Yes, we are talking about anime films! These films have fascinating storylines that keep you engaged and give you a good insight into Japanese culture.

Some of the famous directors, including Hayao Miyazaki, Noboru Ishiguro, and Isao Takahata have churned out ground-breaking movies that have been critically acclaimed worldwide. They have achieved this by paying special attention to conceptualization of the story and its characters, without compromising on the visual appeal of the film.

Here are some of the anime films that you must-watch before your data limit dies!

This is one of Miyazaki’s best creations that has won the Academy Award in 2003 for the Best Animated Feature Film. This film is about a young girl named Chihiro who gets stuck in an ancient bath house of the spirit world where she tries to overcome her fears and escape after rescuing her parents.

Two young girls, Mei and Satsuki, from the city move to a remote location along with their father to be more close to their ailing mother. While they are staying at their new place, they come in contact with the friendly spirits of the forests, and that marks the beginning of a new adventure-filled friendship.

Grave of the Fireflies

Now, this is a film that will melt even the hardest of hearts. It tells the story of a teenage boy, Seita, and his younger sister, Setsuko, who are struggling to survive and facing the devastating effects ofWorld War II. Even with that, there are some light moments in the film, as it portrays how one tries to cope with a situation and tries to make the best of it.

Directed by Hiromasa Yonebayashi, this films portrays the life of the Clock family, the tiny people, who secretly live in the crevices of a home and call themselves as the borrowers. Their lives completely change when their young daughter, Arrietty, gets discovered by the home owner.

Whisper of the Heart

This is a coming-of-age movie that starts with a rendition of the song, ‘Country Roads’, and is about two teenagers Shizuku Tsukishima and Seiji Amasawa who eventually fall for each other.

Castle in the Sky

Everyone desires power and all the riches in the world. Laputa, a legendary floating island, is known just for that. This film is about two orphans, Sheeta and Pazu, who possess a magical crystal, which some pirates and foreign agents are looking for in order to get to the lost island.

Another Miyazaki film that plays with the concept of magic and surreal realism. This film is about Sofi, who is cast under a spell by the Witch of the Waste that turns her into an old wretch. The only way she can break the spell is by seeking out  to a sorcerer named Howl; who lives in a moving castle.

This film is the story of Ashitaka, who is put under a deadly curse while protecting his village from the demon, who was once a boar god. In order to find the cure, he makes a journey to the west of the forest where he finds himself caught in a war between the forest gods and the mining colony.

Here’s a movie that shows witches in a positive light. It is the story of a 13-year-old young witch named Kiki, who needs to complete her training by moving out of her house and living independently in a new city to find her true skills.

This film is about Hana, and her two children, Yuki and Ame, who happen to be half human and half wolf. This film is told from the point of view of Yuki, who narrates the story of their mother, a complete human, and how she raises them and eventually lets them discover and adapt themselves to the surroundings.